While excavating a Huron village north east of Toronto ( known as the Mantle Site ) archaeologists found an iron axe head. They believe it was buried deliberately. Carbon dating shows it pre dates Columbus discovery of the Americas, and European contact by 100 years. A makers mark on the iron axe allowed them to trace it back to the Basque region of Spain. They believe Basque fishermen crossed the Atlantic setting up summer camps on the east coast. When they abandoned their camps for the winter, anything left behind became easy picking. The Mantle site is incredibly large, almost 100 longhouses, each accommodating up to 100 people. A wood fence enclosed the entire village. It was previously believed all the wood required for this massive construction project had been felled with stone tools. Evidence still remains that the axe appears to have been buried on purpose. Perhaps a vision of things to come. 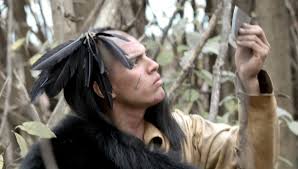