My west coast Canadian corner doesn’t worry much about Canadian winters. Vancouver rests in a rain forest; it snows a few times every winter – mostly we suffer seemingly endless days of gloomy skies accompanied by relentless rain. As I write, rain assaults my bedroom window, winds beat bamboo against the house, with no end in sight – just another winter night.

Weather forecasters love giving names to localized trends or patterns. Vancouver best known for the “pineapple express” – torrential persistent rains associated with southern airflow. Pacific frontal systems, arctic highs or lows – depending on where the jet stream chooses to hover. Nothing too exciting; forget blizzards, ice fog, snow rollers, lake effects snow, Chinooks or tornadoes. I’ve come to terms with this fact – for a weather, particularly storm fanatic – I settled in a most uneventful region of the country. My sister in Saskatchewan lives Canadian weather extremes for me, I hardly ever drool anymore over weather phenomenon playing with the rest of my country.

At least not until news of polar vortexes, ice quakes and backdoor lows hit the news. It simply isn’t fair – these terms blew my meteorological mind – like something out of the movie Day After Tomorrow, where did polar vortex causing ice quakes come from? Ice, or frost quakes are extremely rare – caused by very cold temperatures forcing ground ice to expand and crack rock. Holy crap – time to do some research.

I had no idea polar vortex, also known as polar cyclones where an ever present global fixture. Located at both geographical poles, these cyclones hover in the troposphere and stratosphere. They strengthen in winter and ease back in summer, depending on the difference in temperatures between the equator and poles. A weak polar cyclone causes extreme cold weather “outbreaks”, and is associated with ozone depletion.

Pondering arctic vortex rotation and ice quakes as rain pelts my window may seem silly – I don’t see it that way. I may be a rain saturated weather nut pouting over Toronto residents rude awakening courtesy a series of  rare frost quakes last week; at the same time, I’m flabbergasted by weather terminology that somehow flew beneath my radar.

I’ll come clean by declaring how tired I am of rain, how refreshing a jolting ice quake would be, and how exciting a notion polar vortex is. I’ll admit my sour grapes over weather kicking the ass of every Canadian but myself makes me grumpy. Emotions aside – we need to wake up – this world of ours rests on some pretty crazy circumstances. 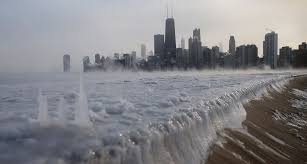