Following the attack on Canada’s parliament, CBC news the National, opened with a clip from Fox News. Why? It was an astoundingly biased, misinformed, hysterical, irresponsible example of right wing propaganda. Newsworthy from a Canadian perspective for illustrating all that’s wrong with so called “news”. Fox took the position America was about to be invaded by ISIS (reporting Ottawa was barely an hour drive from the border). Fox went on to say the border with Canada was the longest unprotected border in the world, and that militants were poised to invade America.

The CRTC (Canadian Radio and Telecommunication Commission) prohibits broadcasting “false or misleading” news – regulations that only apply to Canadian broadcasters. America on the other hand saw fit to abolish the 1949 “Fairness Doctrine” in 1987. (a federal regulation requiring broadcasters to present both sides of controversial issues in a manner that was honest, equitable and balanced)  Apparently fairness violates freedom of speech. Right wing America consistently squashing attempts by Democrat politicians to reinstate fair reporting – the reason fundamentalist Americans gobble up Fox “news” as definitive “truth”.

Freedom of speech is a privilege, freedom to present anything you damn well please as news is appalling. Fox News is responsible for more hate, suspicion, misplaced rage, unfounded bias and plain old stupidity than any other propaganda factory in modern history. I’m so tired of imbecile hot heads spewing Fox gibberish as “truth”. If freedom of speech is more sacred than an obligation to speak the truth – I give up. 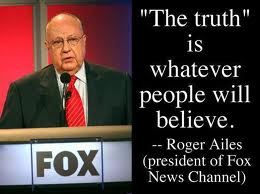