What has three hearts,  soft body with no interior skeleton, a relatively small brain and short life expectancy? The Octopus of course. Noted for intelligence and problem solving abilities, watch this video and ponder.

My line of work inhabits a peculiar realm. Far removed from normal, I teeter on the brink of absurd, and wouldn’t have it any other way. Explaining what I do (flawless execution of off-site catered events) falls woefully short of defining my profession. Hospitality scoffs at tidy little job descriptions. Forget regurgitated expectations, any fool could figure that out. Not for the faint of heart – reality demands a sense of humor, thick skin, willingness to change direction mid step while maintaining unflappable calm and finding solutions without losing control of bat shit situations.

I always start my staff training sessions the same way – “nothing you do in life will show you what you’re made of faster than the service industry”. Today, I was reminded of that.

Launching a full blown postmortem serves no purpose. Words couldn’t do justice to the magnitude of a truly rough day. Take my word – over thirty years in the business and I could count days this rough on one hand.

Tough as it was, all I feel is contentment. When faced with insurmountable odds, I had the pleasure of kicking adversity’s ass. Supported by equally fearless staff, this victory belongs to all of us. To any of you still standing – today wasn’t a day to gripe about. No need to retell gory details, or dwell on outrageous snippets – today proved what you’re made of.

Today Univision, the U.S. based Spanish television network announced it will not air the Miss Universe Pageant. Do tell? Apparently Spanish Americans want nothing to do with Donald Trump. Trump’s very public association with the pageant came to a grinding halt at Univision when Trump blethered this remark on immigrants –

“We have drug dealers coming across, we have rapists, we have killers, we have murderers, I mean it’s common sense. Do you think they’re going to send us their best people, their finest people?”

Today, the entertainment division of Univision Communications Inc. announced that it is ending the Company’s business relationship with the Miss Universe Organization, which is part-owned by Donald J. Trump, based on his recent, insulting remarks about Mexican immigrants.

At Univision, we see first-hand the work ethic, love for family, strong religious values and the important role Mexican immigrants and Mexican-Americans have had and will continue to have in building the future of our country. We will not be airing the Miss USA pageant on July 12th or working on any other projects tied to the Trump Organization.

“I would be willing to bet I would have a great relationship with Putin,” he added. “It’s about leadership.”

Did this nincompoop miss the memo regarding Putin’s shameful involvement in economic and political shenanigans?

This Trumpism speaks for itself –

Trump laid out his unique plan to defeat ISIS. “I say that you can defeat ISIS by taking their wealth,” he said. “Take back the oil. Once you go over and take back that oil they have nothing. You bomb the hell out of them and then you encircle it, and then you go in. And you let Mobil go in, and you let our great oil companies go in. Once you take that oil they have nothing left.”

A few days ago it dawned on me – Alanis Morissette released Jagged Little Pill twenty years ago. “Holy crap, has it been 20 years” gave way to pondering kick ass rocker girls. Alanis wasn’t much of a rocker but oh man, was she pissed off.

Jagged Little Pill  wasn’t about empowerment. Unlike Vancouver’s own Bif Naked making herself perfectly clear in I Love Myself Today – Morissette sang from the bowels of twenty something angst. She managed to encapsulate prickly nuances of imploding relationships into a jagged little pill.

Jagged Little Pill worked because even if you thought the songs were stupid, juvenile lyrics were freaking awesome. No beating around the bush, “were you thinking of me when you f**ked her” – outstanding.

Would it surprise you to learn a sixth mass extinction is underway? How about Earth’s species disappearing 15-100 times faster than the normal rate between previous mass extinctions? Knowing, not since dinosaur’s swan song has Earth witnessed such rapid eradication of species?

If it is allowed to continue, life would take many millions of years to recover, and our species itself would likely disappear early on.

There is general agreement among scientists that extinction rates have reached levels unparalleled since the dinosaurs died out 66 million years ago. However, some have challenged the theory, believing earlier estimates rested on assumptions that overestimated the crisis.

Using fossil records and extinction counts from a range of records, the researchers compared a highly conservative estimate of current extinctions with a background rate estimate twice as high as those widely used in previous analyses.

We emphasize that our calculations very likely underestimate the severity of the extinction crisis, because our aim was to place a realistic lower bound on humanity’s impact on biodiversity.

Study co-author Paul Ehrlich is the Bing Professor of Population Studies in biology and a senior fellow at the Stanford Woods Institute for the Environment. Ehrlich said:

[The study] shows without any significant doubt that we are now entering the sixth great mass extinction event.

Not over yet, the second image illustrates  “auroral oval” over tonight’s  northern hemisphere sky. NOAA predicts a 90% chance of widespread aurora activity June 23, diminishing slightly to 70% on June 24.

We tend to think of auroras as winter phenomenons, accustomed to images of northern lights skipping across frozen tundra. Don’t be fooled, stars have no seasons.

What better way to spend the first day of summer than stumbling upon street wrestlers serenaded by a dude singing Johnny Cash covers. 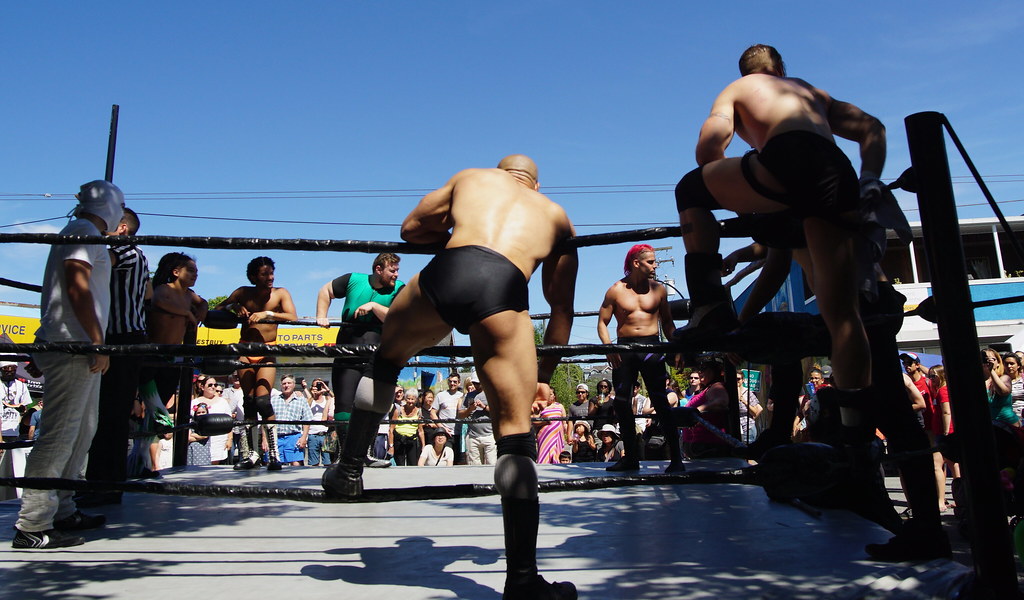 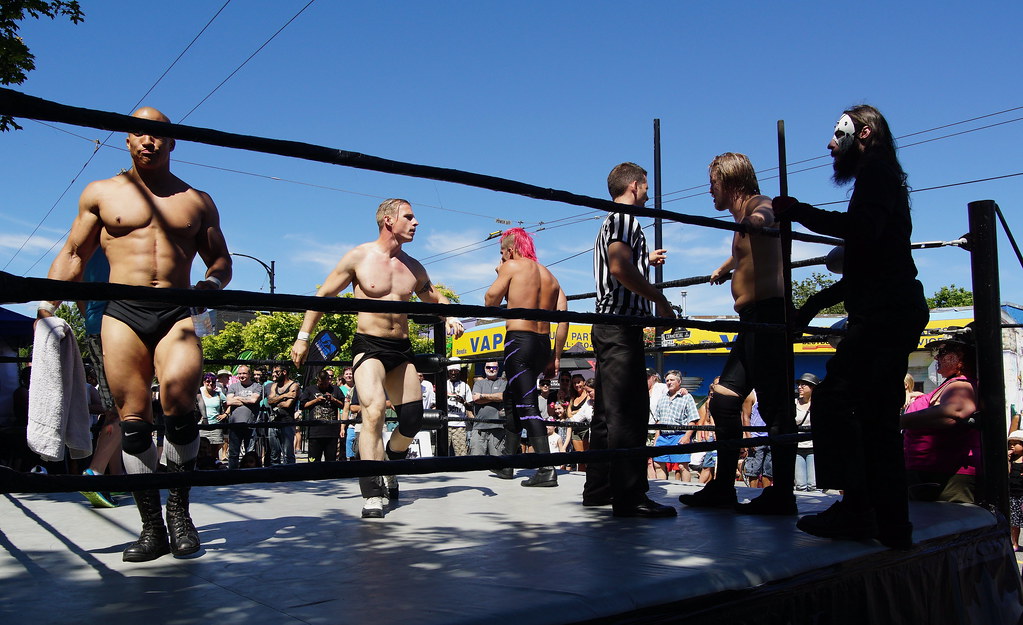 At “car free” day on Commercial Drive – my apologies for not capturing Johnny Cash dude.

I don’t care who you are or what beliefs get you through the day, something about the summer solstice commands our inner Pagan. I’m not making this up. Imperceptible tendrils of ancient ceremony take root as solstice approaches.Everywhere I look, the subtle blush of anticipation betray the otherwise oblivious. Nature is a determined master. 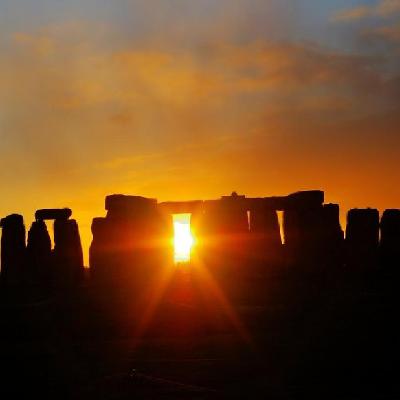 This clip of Jon Stewart speaks for itself. All I ask is that you watch and ponder.

On July 14, 2015 the National Space Society (NSS) probe New Horizons will arrive within 12,500 kilometers of Pluto. Launched 9 years and 5 billion kilometers ago, New Horizons is days away from capturing first ever close-ups of Pluto. This week the NSS released  a “teaser” video to celebrate Horizon’s “close encounter”. Watch and wonder.