Summer demands a directional refresher course. I’ve posted this before and will do so again. Put down the GPS and learn how to tell north from south –

Imagine yourself lost in the woods without a compass or GPS. An accurate sense of direction could save your bacon; so which way is north or south? In the Northern Hemisphere the sun rises in the east and sets in the west. At noon the sun will appear in the middle of the horizon and directly south. Walk facing the sun and you will be heading south, sun at your back sees you trudging north. For the Southern Hemisphere simply reverse the process.

Not noon, don’t know the correct time – here’s another method. Find a stick about a metre long, drive it straight up into the ground of a sunny spot. Mark the end of the shadow it casts with a rock. This will be west. Wait about 15 minutes then mark the end of the cast shadow with another rock. This will be east. Draw a line between the two points for your east/west position and another at a 90 degree angle for your north/south line.

No sun? Look for moss on trees – moss on the southern side is usually greener and thicker. Ants also build their hills on the warmer southern side of trees or hills,just  as snow melts faster on southern exposures.

What if night has fallen? If the moon rises shortly before sunset the bright side will face west. If it rises much later around midnight, the brightly illuminated side faces east. If you can’t see the moon but the sky is clear enough to find stars, look for the Big Dipper, next find the Little Dipper and draw an imaginary line between the two brightest stars in the bowl of the Big Dipper to the brightest star in the handle of the Little Dipper. This should take your eye to Polaris or the North Star; the bright middle star in the constellation Cassiopeia.

I’ve only ever been lost once, and that was in a department store when I was four. If I ever find myself lost in the woods – at least I’ll be able to find my direction home.

Commentary strikes me as frivolous – sit back, take a deep breath, click and journey to the end of the universe –

In my home, sunny work free Sundays spell adventure day. Spontaneous as they are, unspoken rules forged over thirty plus years of marriage hold them in place. Content to let my husband choose our destination is pivotal. He drives, I sit back and take it in – the element of surprise far out weighs inclusion in our destination. Eighty kilometers out of Vancouver we exit the highway at Chilliwack, knowing in my heart a half hour diversion to walk a few blocks of classic car show has nothing to do with our destination.

Back at the car, he spills the beans, “we’re going to Bridal Falls” – setting true adventure day in motion. Aside from spontaneous origin and vague destination, adventure parameters are strict – avoid main highways, absolutely no fast food, stop as often as we like. Yale Road meandered past corn, raspberry and blueberry fields, dotted with dairy farms and a RCMP vehicle guarding the demise of a  road kill deer. Stopping at a garden shop netted an Echinecia plant. A kilometer or so down the road, a field of chickens found us circling back for a closer look.

In all my life, despite rumors of free range chickens, I’ve never seen anything like it. Hundreds, likely thousands of happy chickens roaming the greenest of fields. Without exception, every last one the County Fair blue ribbon epitome of poultry perfection. Snapping photos from afar, we heard a neighbour across the street call out “do you know how many people stop and take pictures of these chickens?”  A brief exchange of pleasantries revealed eggs were for sale, “they’re really good, just go knock on the door”. Moments later we’re knocking, dog is yapping and Harvey calls out from an upstairs window “I’ll be right down”. Harvey’s hens are certified organic – we buy 2 flats of 30 for $25. Sixty eggs! No worries, they’re delicious. 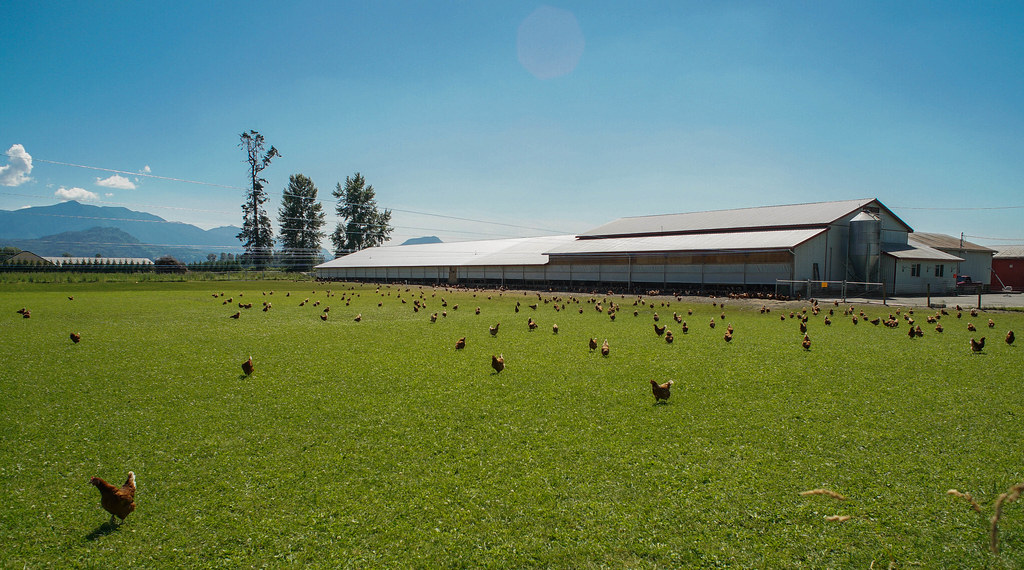 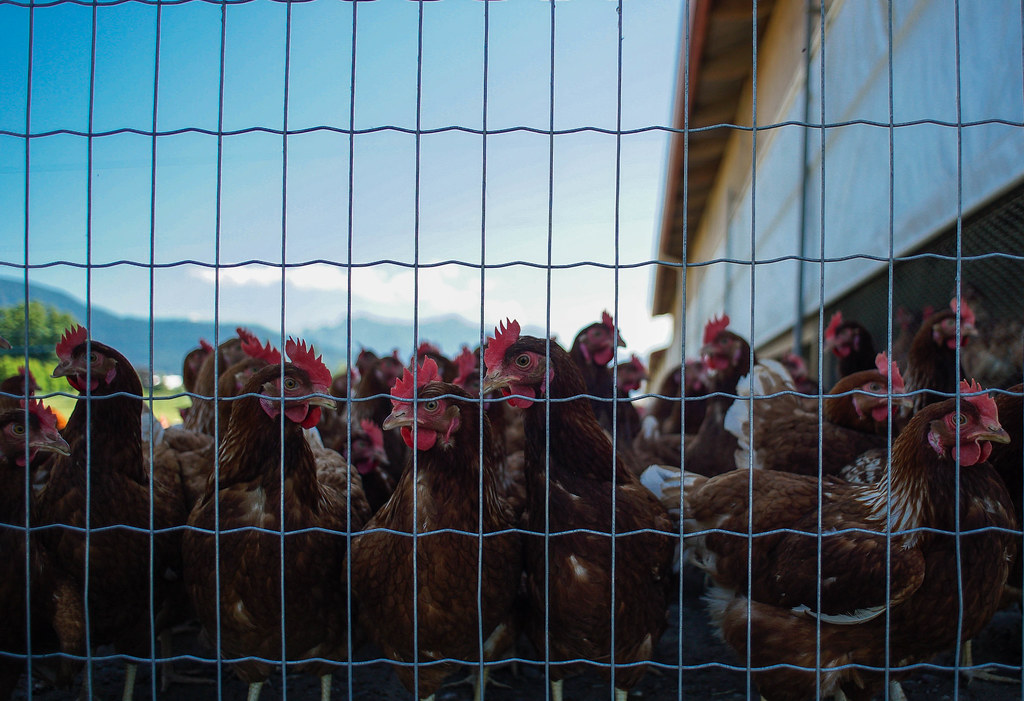 A few kilometers later we cross the highway at Bridal Falls. “It has to be over 20 years since we stopped here, how old were the kids, do you remember this steep hike?”. 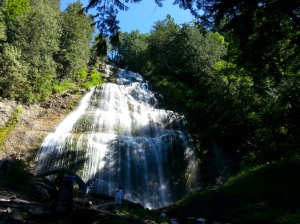 What goes through the mind of a person who thinks this is a good idea? Is he packing his pup to a dog park? Dropping it at doggie daycare on the way to work? Clearly this isn’t pup’s first pack, does it submit gracefully or kick up a fuss? Are doggie packs a thing, did I miss something? 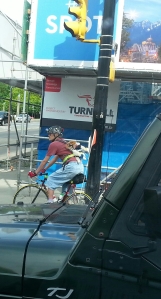 Apologies for image quality – it was a hasty cell phone capture in moving traffic. Click on the image, when it enlarges click again to magnify absurdity in all its glory.

Work can be tedious. Dwelling on matters of daunting physical exertion, tricky timelines, spur of the moment demands, sloppy drunks, mothers of the bride, uppity executive assistants or barbecuing in torrential rain are pointless. Not dismissing the probability of needing my head examined, I remain steadfast in belief – attitude is everything. Every so often inexplicable moments of joy remind me why hospitality puts a smile on my face.

I saw his hands first, trembling with effort as they struggled to grasp a burger. Looking up, assistance with cheese, tomato and mustard found the man who made my day. I swear his eyes twinkled when “I like your hat” left my lips. “Thank you” he smiled. Eons beyond “liking” an eighty something year old gentleman gangster rocking a 1980’s Ghostbusters cap, I turned and walked away, happier than I’ve been in a very long time. 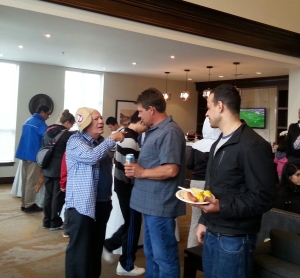 Hunting for the best cover of Bob Dylan’s Knocking On Heavens Door dominated well over an hour this evening. Concluding every version has merit, led to pondering why the original hadn’t factored in the quest. ( that’s an exaggeration, in truth I went “huh” mid hunt and clicked on more covers).

Some time later it came to me – certain songs are destined to carry weight from generation to generation. Lyrical plucks of conscience, melodic fists erupting from belly aches of social injustice. Here’s the thing, Knocking On Heavens Door is an anomaly – it wasn’t born a protest anthem. Dylan’s now metaphorical heaven of consequence, was penned for a movie soundtrack.

Bob Dylan wrote and sang Knocking On Heavens Door for the soundtrack of  1973’s movie Pat Garrett and Billy the Kid. In the film it played as the voice of a deputy sheriff, dying of bullet wounds, telling his wife “Mama take this badge off of me”.

Mama, take this badge off of me
’cause I can’t use it anymore.
It’s gettin’ dark, too dark to see
I feel like I’m knockin’ on heaven’s door.

Mama, put that gun to the ground
’cause I can’t shoot them anymore.
There’s a long black cloud comin’ on down
I feel like I’m knockin’ on heaven’s door.

I don’t care if a definitive cover exists. Hunting for cover reminded me – music is protests’ mightiest weapon.

By now you may have guessed, I peg my husband’s photographs as mesmerizing. That said, husband or not I’d still find artistry in their ethereal stories. 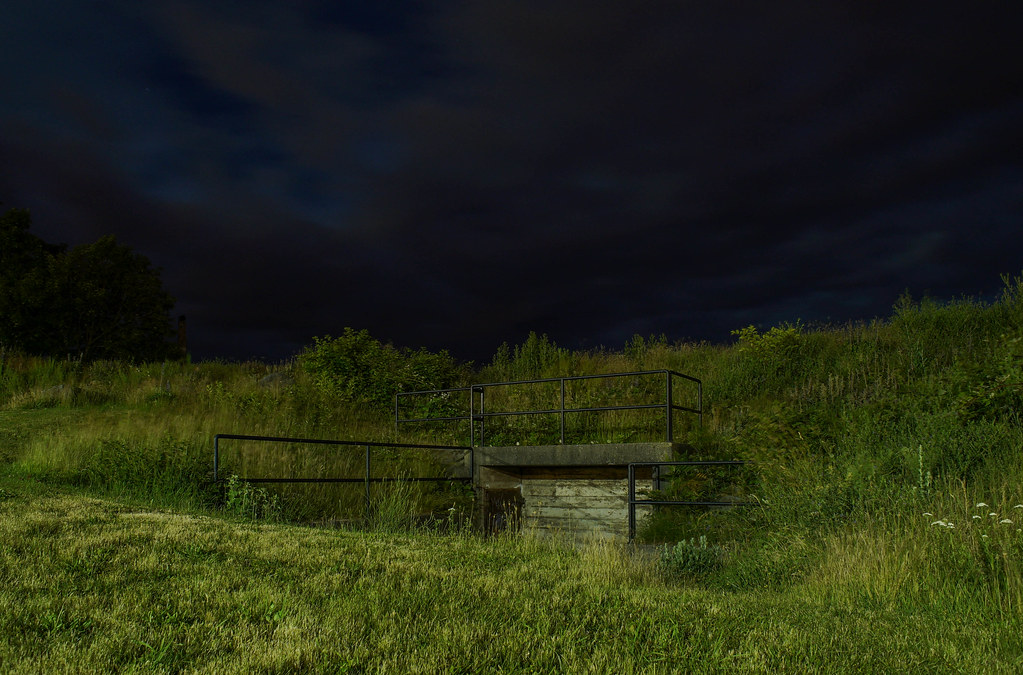 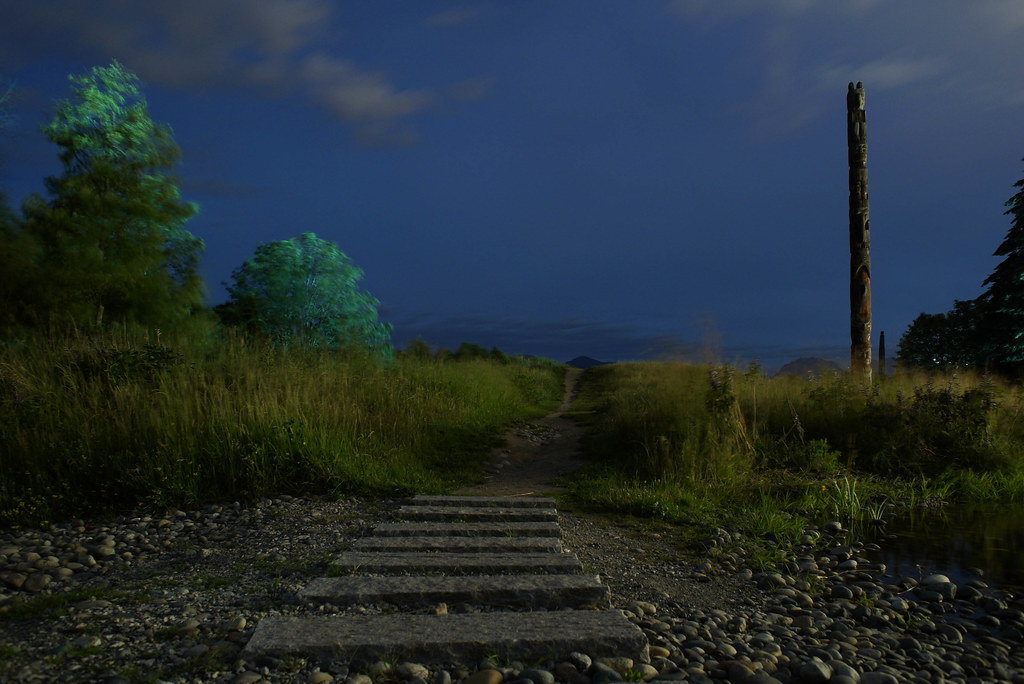 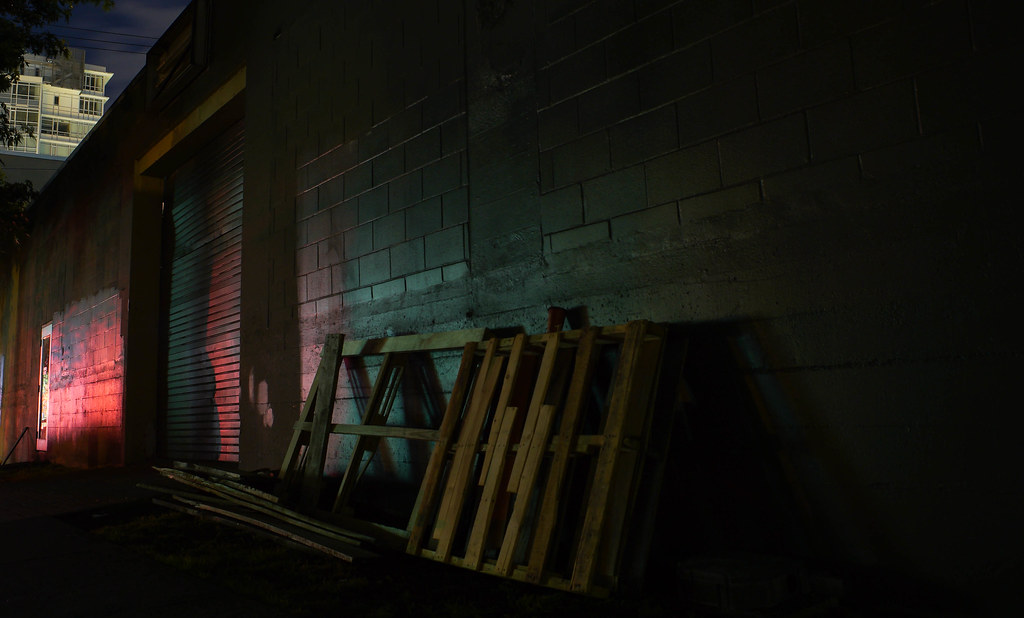 Five years ago NASA launched JUNO (Jupiter Near-Polar Orbiter ), a probe destined to orbit 4,667 kilometers above gas clouds of Jupiter’s atmosphere. As of yesterday “basketball court” sized, solar powered JUNO was 13.8 million kilometers from Jupiter, on course for the main event set to begin July 4, 2016. That evening, JUNO will fire her main engine for 35 minutes, time needed to slow her enough to gently enter a Jupiter specific “flattened oval” orbit – a trajectory designed to approach Jupiter over the north pole, then drop rapidly below the radiation belt as it moves toward the south pole.

Jupiter’s rotation is so fast, one day is 10 hours. Just beneath the cloud tops, a layer of impossibly compressed hydrogen acts like an electrical conductor, generating a behemoth magnetic field, comprised of electrons, protons and ions traveling close to the speed of light. In a nutshell – a region of radiation surpassing all else in our planetary system.

If JUNO’s radiation shielded wiring and sensor barriers hold up, NASA hopes for 37 scheduled “close approaches”. Regardless of successful approaches, even one will trounce Pioneer 11’s 1974 closest distance of 43,000 kilometers.

Good luck Juno. Rosetta did it, so can you. Jupiter will be revealed July 4.

This “trailer” released by NASA a few days ago begs for high definition and surround sound. Expand your screen, turn up the volume, take in Juno’s Jupiter.

A few hours after the mass shooting at a Orlando night club, Sacramento Baptist Pastor Roger Jimenez treated his congregation to a sermon riddled with caustic mirth –

“Hey, are you sad that 50 pedophiles were killed today? No … I think that’s great. I think that helps society.  I think Orlando, Florida’s a little safer tonight,” he said to the crowd of believers in front of him.

“It is unnatural for a man to be attracted to another man,” he said as he preached for more than an hour.

“The tragedy is that more of them didn’t die,”

Above – Westboro Baptist Church of Topeka, Kansas celebrated the massacre by tweeting this hate filled trio of radical religious compassion.

Help me out – was God or a radicalized Islamic terrorist pulling the trigger? This is important, America can’t have it both ways. Citizens need clear direction, all this confusion amounts to a child’s fear of evil clowns under the bed. Has God gotten sneaky? I can’t imagine God laugh slapping his leg, allowing mere mortals to take credit for his wrath. Surely a sexually confused nut case blithering back against the wall allegiance to radical Islam, isn’t a foot soldier of the Christian God. My head hurts!

How can America sit still while the likes of Donald Trump or Pastor Jimenez lay claim to crazy. Not only claim, but instigate an insidious trail of hysterical fear based on personal agendas. Muslims are not the enemy, homosexuals don’t threaten humanity – accusation, fear mongering and knee jerk assumption reign as our greatest enemy. Radicalized Islam, messenger of God, my ass!

It was a hate crime, an act of crazy inflicted on innocent people by an American citizen of Muslim heritage. How dare profiteers, religious, political or otherwise claim random crazy as their instrument of fear. Listen carefully America – random acts of crazy aren’t terrorism by default, Muslim heritage doesn’t catapult crazy to the realm of terror.