Pope Francis entered the Vatican with assurances of zero tolerance for sexual abuse within the Catholic church. Last month Francis realized a unsettling truth – talk is cheap, without tangible action blind faith has limits. When all the starch in a Pope’s hat isn’t enough to deflect sexual abuse scandal, the church is forced to react. In this case – 80 Chilean priests credibly accused or convicted of sex crimes, found Francis on a damage control flight to Santiago.

“Pain too for the suffering of ecclesial communities, and pain for you brothers and sisters, who after working so hard, have seen the harm that has led to suspicion and questioning; in some or many of you this has been a source of doubt, fear or lack of confidence.” He said at times, some had even been insulted in the metro and that by wearing clerical attire they had “paid a heavy price.”

“Even been insulted in the metro” Francis? Did you just preface insult with even? Even, as in oh the unfathomable horror? Even, as in how dare anyone bruise egos of pious clergy? Even as outrageous reason to dispatch empathy for the “heavy price” Vatican soldiers “paid”? Even is not effective damage control. By the end of his first day in Chile, public disgust for all things Holy culminated in three Catholic churches torched and burned to the ground. 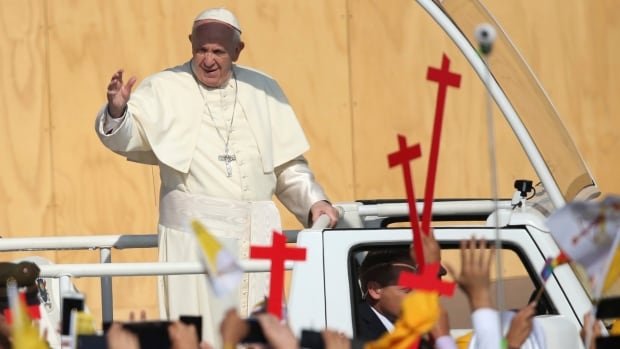 Gag worthy disgust over “even been insulted in the metro” becomes clear once I explain what drives good Catholics to burn churches. Ponder Rev. Fernando Karadima, notorious Santiago sexual predator “forced” to retire in 2011 then sanctioned by the Vatican to a lifetime of “penance and prayer” for sexual molestation of children. Wealthy, connected, elderly Karadima slithered away, his victims did not.

The delegation met Francis’ top advisor Cardinal Sean O’Malley, placed the letter in O’Malley’s hand on the promise O’Malley would personally deliver it to Pope Frances. “And at a later date, he assured us that that had been done.” – then commission member Marie Collins.Later in 2015 Frances visited Philadelphia, coincidentally home of abuse victim Cruz. Cardinal O’Malley contacted Cruz shortly after the Popemobile left Philly, O’Malley assured Cruz his letter was delivered to Francis.

From a Time article written by Nicole Winfield and Eva Vergara / AP – a good read at http://time.com/5133127/pope-francis-chile-sexual-abuse-coverup/ –

“Holy Father, I write you this letter because I’m tired of fighting, of crying and suffering,” Cruz wrote in Francis’ native Spanish. “Our story is well known and there’s no need to repeat it, except to tell you of the horror of having lived this abuse and how I wanted to kill myself.”

Cruz and other survivors had for years denounced the cover-up of Karadima’s crimes, but were dismissed as liars by the Chilean church hierarchy and the Vatican’s own ambassador in Santiago, who refused their repeated requests to meet before and after Barros was appointed.

After Francis’ comments backing the Chilean hierarchy caused such an outcry in Chile, he was forced last week to do an about-face: The Vatican announced it was sending in its most respected sex-crimes investigator to take testimony from Cruz and others about Barros.

In the letter to the pope, Cruz begs for Francis to listen to him and make good on his pledge of “zero tolerance.”

“Holy Father, it’s bad enough that we suffered such tremendous pain and anguish from the sexual and psychological abuse, but the terrible mistreatment we received from our pastors is almost worse,” he wrote.

Cruz goes on to detail in explicit terms the homo-eroticized nature of the circle of priests and young boys around Karadima, the charismatic preacher whose El Bosque community in the well-to-do Santiago neighborhood of Providencia produced dozens of priestly vocations and five bishops, including Barros.

He described how Karadima would kiss Barros and fondle his genitals, and do the same with younger priests and teens, and how young priests and seminarians would fight to sit next to Karadima at the table to receive his affections.

“More difficult and tough was when we were in Karadima’s room and Juan Barros — if he wasn’t kissing Karadima — would watch when Karadima would touch us — the minors — and make us kiss him, saying: ‘Put your mouth near mine and stick out your tongue.’ He would stick his out and kiss us with his tongue,” Cruz told the pope. “Juan Barros was a witness to all this innumerable times, not just with me but with others as well.”

“Juan Barros covered up everything that I have told you,” he added. 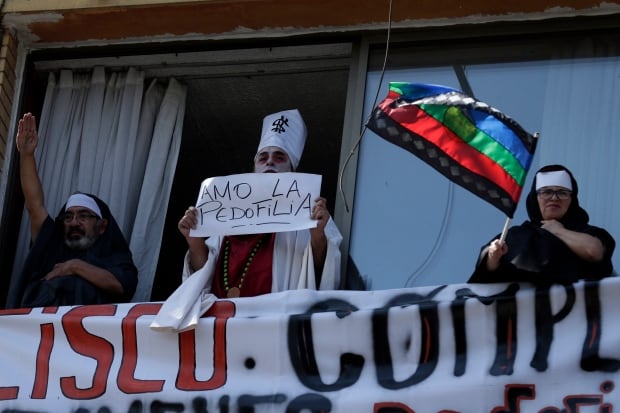 From a balcony, protesters dressed as clerics gesture and display a banner saying: ‘I love pedophilia.’ (Victor R. Caivano/Associated Press)

Escalating protest in Chile didn’t stop Francis from feigning zero sex abuse tolerance, it didn’t occur to Francis steadfast defense of Barros presented a problem. Surely the pope knew abuse victim Cruz wasn’t content to suffer in silence, that 2 years past hand delivered Vatican mail Cruz shared his letter with many eyes. All Francis had to do was defrock Barros. Toss the faithful a bone, make a gesture, how hard is that?

Unwavering Francis left Chile without apology for calling accusations against Barros slander. On the plane home, confronted by reporters, the pope said: “You, in all good will, tell me that there are victims, but I haven’t seen any, because they haven’t come forward.” Excuse me Francis, are you playing the plausible deniability card? What fresh hell is this. Pardon me, I need time to recover from a laughing fit.