Regardless of determination to dismiss, avoid or walk away from slippery slopes leading to fundamentalist Christian jibber-jabber, every so often it pays to have an arsenal of politely dispatched counterpoints up your sleeve.Scientific proof of insect digesting genomes lingering in the soup of our current gene pool serves the purpose nicely.

Ancient mammal ancestors of all animal species, including humans, were insect eaters. 66 million years ago small insect digesting mammals darted between dinosaur toes. Able to escape asteroid induced dinosaur apocalypse by burrowing underground, formerly inconsequential bug eaters gave rise to life as we know it. Fickle as evolution may be, it saw no reason to deny humans chitinases markers, genetic enzymes capable of breaking down chitin, the hard outer shells of ingested insects.

Research published by Christopher Emerling of UC Berkeley in the journal Science Advances, based analysis of 107 different animal species genomes to conclude –

“One of the coolest things is, if you look at humans, at Fido your dog, Whiskers your cat, your horse, your cow; pick any animal, generally speaking, they have remnants in their genomes of a time when mammals were small, probably insectivorous and running around when dinosaurs were still roaming Earth,” said postdoctoral fellow Christopher Emerling. “It is a signature in your genome that says, once upon a time you were not the dominant group of organisms on Earth. By looking at our genomes, we are looking at this ancestral past and a lifestyle that we don’t even live with anymore.”

Evolution is why millions of people around the world digest insects. God unleashed a plague of locusts to punish humanity, evolution shrugged and sat down at the dinner table. 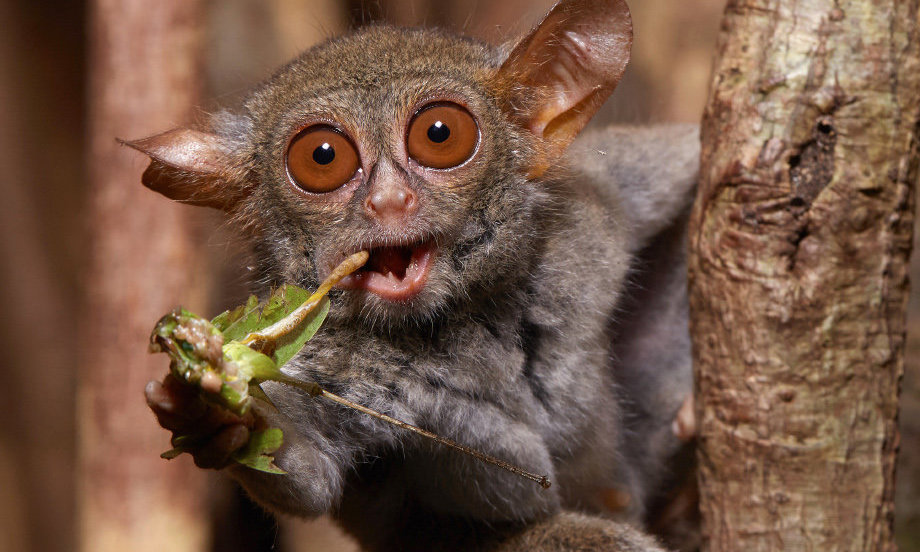 A spectral tarsier (Tarsius tarsier) feeding on a grasshopper in Tangkoko National Park, Northern Sulawesi, Indonesia. Tarsiers have five chitinase genes to digest the high amount of chitin in their insectivorous diet, which likely …more