Peter had me at murmuration, his perspective sealed the deal. 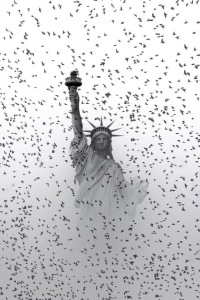 The photo is a murmuration of Starlings surrounding the Statue of Liberty but it made me think about the way in which the values that made this country what it has become have themselves been clouded and obscured.

Society seems no longer to care about values.  I blame that on the movement to deny any absolute values that began with questioning religion and religious morality.  Once we began (as a society) to question whether “right” existed, or whether “wrong” was something that could be applied universally it became easy to say that “no one” was really altruistic, that ethical matters only really applied in… well… maybe they don’t… oh, heck, lets’ throw ethics out anyway, who needs to be judged….  You see how it all goes pear shaped once you start questioning.

I wonder, can you question things and still uphold some set of values? Speed limits for example —…