Launched January 19, 2006 NASA’s New Horizons probe buckled down, unfazed by billions of miles between Earth and mission objectives – exploration of Pluto, Pluto’s moons and the Kuiper Belt. A few days ago, July 14, 2017 marked the second anniversary of New Horizons first fly-by of once a planet Pluto.

NASA’s New Horizons spacecraft looked back toward the sun 15 minutes after its closest approach to Pluto on July 14, 2015, capturing this near-sunset view of the dwarf planet’s icy mountains and flat ice plains. The image was taken from a distance of 11,000 miles (18,000 kilometers) from Pluto; the scene is 780 miles (1,250 km) wide. – https://www.space.com/16533-pluto-new-horizons-spacecraft-pictures.html

The magnitude of New Horizons defies comprehension, it’s tough to fathom 7.5 billion kilometers culminating in near perfect dalliance with outer edges of our solar system. Rather than dismiss New Horizons for lack of tangible perspectives, ponder distance and time traveled with new eyes. Invite New Horizons images for tea, sip politely, let cosmic wonder tickle your toes. Laugh out loud when I tell you New Horizons has enough spring in her step to cross 1.6 billion kilometers beyond Pluto for a hand shake with asteroid 2014 MU69 on January 1, 2019. Beyond that, New Horizons will wait as only good soldiers can. Ready to rise from trenches when fresh orders dictate another charge into the great unknown.

On October 1, 2015 images from NASA’s New Horizons probe,  inserted Charon into our consciousness. The solar system gained dimension, suddenly Pluto’s neighborhood included Charon, a moon half the diameter of Pluto and largest moon relative to its planet in our solar system. Insignificant little Pluto was part of a galactic community.

New Horizons is to Pluto as Cassini is to Saturn – unassuming civil servants devoid of ulterior motive, diligent observers dedicated to truth without judgement or personal agendas. New Horizons introduced Pluto with unbiased observance, an irrefutable glimpse into cosmic reality. Part of this reality is Charon.

NASA’s New Horizons captured this high-resolution enhanced color view of Charon just before the spacecraft’s closest approach on July 14, 2015. The image combines blue, red and infrared images taken by the spacecraft’s Ralph/Multispectral Visual Imaging Camera (MVIC); the colors are processed to best highlight the variation of surface properties across Charon. Charon’s color palette is not as diverse as Pluto’s; most striking is the reddish north (top) polar region, informally named Mordor Macula. Charon is 754 miles (1,214 kilometers) across; this image resolves details as small as 1.8 miles (2.9 kilometers). Image credit: NASA/JHUAPL/SwRI

This composite of enhanced color images of Pluto (lower right) and Charon (upper left), was taken by NASA’s New Horizons spacecraft as it passed through the Pluto system on July 14, 2015. This image highlights the striking differences between Pluto and Charon. The color and brightness of both Pluto and Charon have been processed identically to allow direct comparison of their surface properties, and to highlight the similarity between Charon’s polar red terrain and Pluto’s equatorial red terrain. Pluto and Charon are shown with approximately correct relative sizes, but their true separation is not to scale. The image combines blue, red and infrared images taken by the spacecraft’s Ralph/Multispectral Visual Imaging Camera (MVIC). Image credit: NASA/JHUAPL/SwRI

Ponder the magnitude of New Horizons – a miniscule incarnation of mankind’s ingenuity,eclipsing the magnitude of what is possible.  Orbiting a former planet at the edge of our solar system, a cosmic dot we discovered a mere 85 years ago. 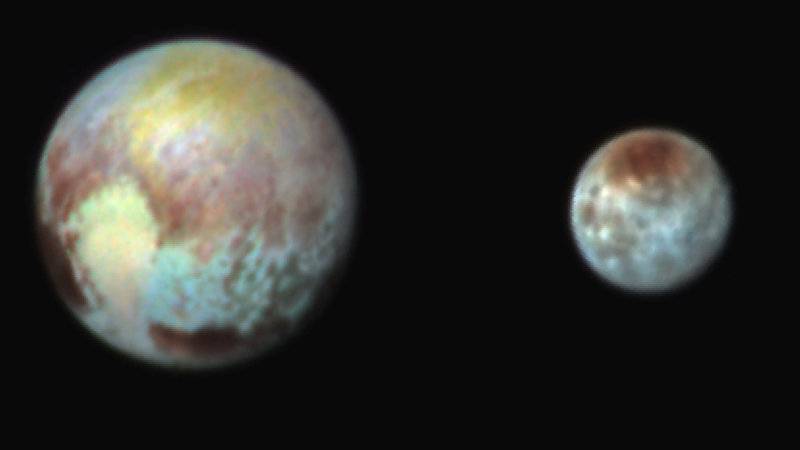 This last link is the grandfather of them all – a link to NASA TV and all things Pluto/New Horizons.

NASA’s New Horizons probe left Earth over 9 years ago.  Where does nine years find Horizons? 4.8 billion Km. from Earth, barely 3 months away from Pluto and able to transmit the first colour photograph of Pluto and its largest  moon Charon.

Still 115 million Km. away, New Horizons first image is being called a “preliminary reconstruction”.  Mark July 14 on your calendar as the anticipated date New Horizons officially enters the “Pluto system” – close enough to capture detailed surface images of areas no wider than a few kilometers, despite traveling at speeds of 50,000 Km/hour.

Discovered by Clyde W. Tombaugh in 1930, Pluto’s brief distinction as ninth planet from the Sun fizzled in 2006 with International Astronomical Union rewriting the definition of “planet”. Tiny Pluto, abut half the width of America, has since answered to the name “dwarf planet”. Size isn’t everything – Pluto holds a planetary designation unique in our solar system, that of “binary planet”. Binary because the largest of Pluto’s 5 known moons is so close in size.

Ponder New Horizons – consider a decade of relentless travel across many billion kilometers of space. Keep in mind New Horizons path, science can’t draw a straight line, gas up a probe, send it on a road trip – consider plotting a course through the labyrinth of space, one that depends on gravitational pull of planets and their moons for propulsion.

I was an 8 years old dreamer when we landed on the moon. The world stopped, holding a collective breath to mark science fiction dissolving into science reality. It saddens my inner dreamer to ask how many 8 year old children today even care about remarkable space missions. Fantastic accomplishment might be commonplace these days, that doesn’t make them ordinary. New Horizons is an extraordinary realization of science. Take a moment to grasp the enormity of mankind’s progress.