Emin Agalarov is a Russian pop star. His father is Aras Agalarov, a rich developer who worked with Donald Trump to host the 2013 Miss Universe pageant in Russia. By all accounts, Trump enjoyed Agalarov hospitality, going so far as to make a cameo appearance in an Emin music video. Shortly after Trump returned to America, Emin’s sister appeared at Trump Tower in New York – “bearing a gift for Trump”, a sealed letter from Putin. On November 11, 2013 Trump tweeted –

“I had a great weekend with you and your family. You have done a FANTASTIC job. TRUMP TOWER-MOSCOW is next. EMIN was WOW!” 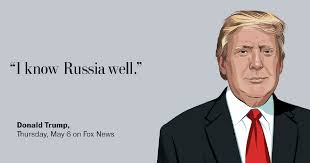 In June 2016 Emin’s publicist Rob Goldstone contacted Donald Trump Jr. with a message from Aras Agalarov – “The “crown prosecutor of Russia” had some information that could “incriminate” Hillary Clinton, Goldstone wrote in an email. “This is obviously very high level and sensitive information but is part of Russia and its government’s support for Mr. Trump — helped along by Aras and Emin,” Goldstone continued.”. Donald Trump Jr. replied, “If it’s what you say I love it”, then called Emin to set up a meeting at Trump Tower a few days later.

When Don Jr.’s meeting became known last summer (confirmed in emails he himself released), it seemed to quite clearly show Trump’s team willing to accept campaign help from the Russian government. However, all parties involved claimed, and continue to claim, that the meeting ended up being a dud and let nowhere.

Emin didn’t seem particularly bothered by the development. Documents later released by the Senate Judiciary Committee show Goldstone texting Emin in a panic, worrying about his own reputation being destroyed because he was being painted as “some mysterious link to Putin.” Emin responded: “That should give you mega PR,” with a wide-eyed, eyebrows-raised emoji face.

Fast forward, a year later and half a world away Russian pop star Emin releases a video satirizing Trump, Ivanka, Stormy Daniels and Hillary Clinton. In “Got Me Good”, Emin places himself front and center in a musical parody of American politics. Between clips of Emin briefcase and envelope exchanges with Donald, Ivanka, Hillary and Stormy Daniels impersonators, Emin sings “you got me so good, you really got me so good”. WTF!!!

“The video shows Emin shadily meeting and hanging out with impersonators of Trump, Ivanka, Stormy Daniels, and Hillary Clinton — all as he’s being surveilled by a shadowy figure.

It sets some scenes, with Emin and Trump, at the 2013 Miss Universe pageant. “I wish you at least would be honest, I wish that you told me the truth,” Emin croons as footage of him and Trump plays. (Despite the video, the lyrics generally sound like they refer more to a romantic relationship.)

At one point, the video shows a shows a shadowy figure at a computer terminal watching a video of Trump partying in a hotel room with several bikini-clad women and Emin himself. The figure then erases Trump from the video, in what’s clearly a reference to the “pee tape” rumor. Is Emin alluding that he knows something?”

Sincerest apologies – I’m out of words.