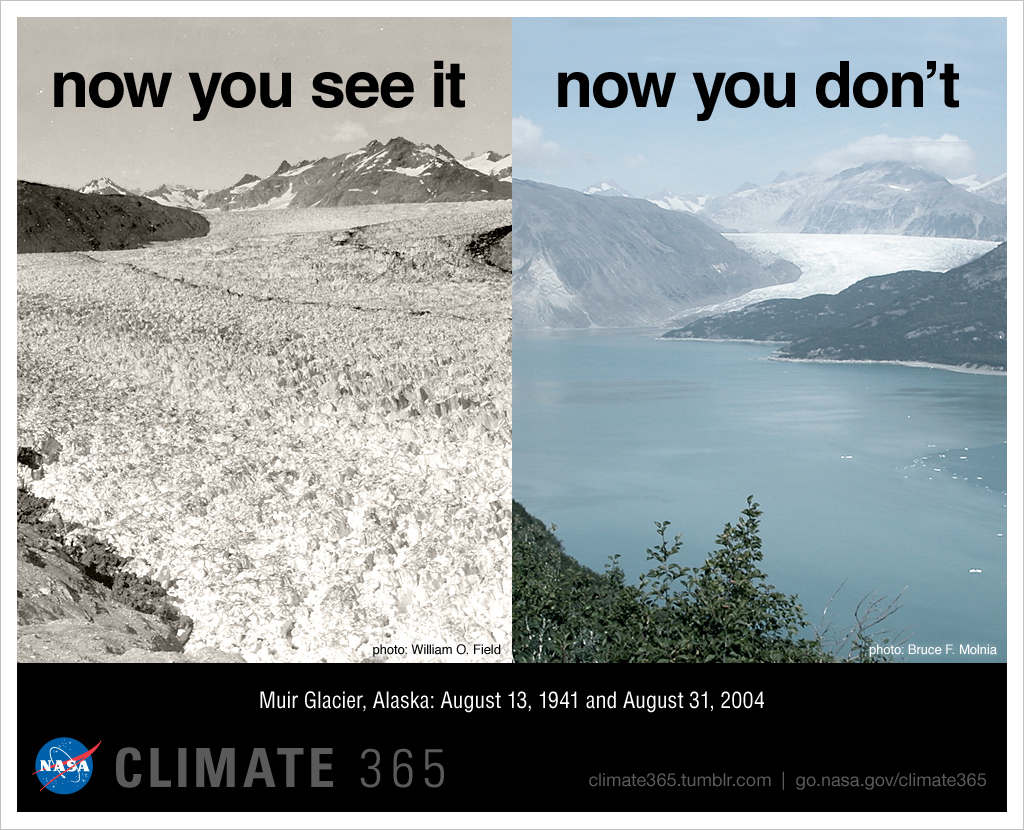 There are those who flatly deny man-made climate change, others who prescribe to global warming as a natural earth cycle, and scoffers convinced the whole thing is an elaborate hoax. Presidential wannabe Donald Trump contends climate change a conspiracy perpetrated by China to undermine the U.S. economy. Bastions of tight ass right wing patriotic duplicity, the likes of Heartland Institute, Americans for Prosperity and the Heritage Foundation, use their considerable non-profit resources to cast doubt on climate science – target of choice, the NOAA. Inhabiting the opposite end of the spectrum, a plethora of organizations from the David Suzuki Foundation to Greenpeace champion the result of humanity’s indifference to drastic warning signs of climate calamity.

On Monday UK climate scientist Ed Hawkins of the University of Reading, posted this “infographic” on Twitter. In a Washington Post article, Jason Samenow wrote –

“Over the years, scientists have attempted to visually communicate the Earth’s warming in many ways.  They’ve developed an array of maps, charts, and animations that present an unmistakable picture of a warming world.

But I’ve seen no visual as striking and effective as the infographic posted to Twitter Monday by climate scientist Ed Hawkins.”

Regardless of which camp you call home, ponder Hawkin’s graphic. Each ring represents a year from 1850-2016.

Boreholes in northern Canada, Norway and Russia indicate a .4 degree increase in ground temperatures at a depth of 60 meters. It might sound like no big deal – let me assure you otherwise. In the last decade it translates to an increase greater than the last 100 years. So why worry about mushy tundra?

Trapped in that permafrost are enormous amounts of formerly frozen ancient carbon. As the ground warms, billions of voracious microorganisms belly up to the all you can eat buffet. Devouring carbon releases vast amounts of CO2 into the atmosphere – CO2 that contributes to accelerated global warming.

Robert Spencer from the University of Florida, lead researcher of a paper published April 23, 2015 in Geophysical Research Letters said –

“When you have a huge frozen store of carbon and it’s thawing, we have some big questions. The primary question is when it thaws, what happens to it? Our research shows this ancient carbon is rapidly utilized by microbes and transferred to the atmosphere, leading to further warming in the region and therefore more thawing. So we get into a runaway effect.”

While the climate denial camp busily pats itself on the back for convincing the masses we have nothing to worry about – stop and ask yourself why people gobble their self serving propaganda hook, line and sinker.

You’ve gotta love American politics, only in America would the head of the Environment and Public Works Committee saunter onto the Senate floor with snowball in hand. James Inhofe, Republican Senator from Oklahoma, chairman manning the helm of environmental issues, had a point to make. This wasn’t just any snowball, it was proof God existed and climate change was a hoax.

Inhofe isn’t content with jurisdiction over environment – he published a book titled The Greatest Hoax, urging readers to ignore science (dubbed alarmists) because a greater “Authority” has already spoken.

Over the past few days I’ve been called “eco-tard” “nuts to ponder” “ignorant clown” “climate fetishist” “moronic liberal” “parroting lies of liars” – and those are just the nice names. More than one of these people supported venom with links to The Greatest Hoax.

All I can say is “good luck America” and have a nice day.

This isn’t about who or what causes global warming, that debate can wait. All I ask is that you take a few minutes to watch this video…..

What does climate change mean,  how do people define global warming? Do we think of melting ice caps in terms of rising ocean levels, threatened animal habitats, violent unpredictable weather? Do we think about it at all? Are we confused by anti warming propaganda, suspicious of scientific proof? How many ponder a connection between climate change and the Taliban?

Founded in 1994 by Mohammed Omar, iron fist Taliban fundamentalism seized control of Afghanistan in 1996. Brutal Taliban justice, horrific oppression of women, terrorist agendas, outraged the global community long before 9/11. One of the first Taliban edicts – eradicate all opium poppy fields as an offense to Islam. From 1996 to the American ousting of Taliban rule in 2001, Afghan farmers who once supplied of 60% of world heroin, grew wheat crops.

Unfortunately 2001 coincided with a period of unprecedented drought in Afghanistan. Devastated farmers had families to feed – the Taliban needed money, soldiers and safe havens. Fragmented Taliban forces came up with a solution. In exchange for “taxes”, recruits and absolute indifference to caching weapons or hiding insurgents, they would protect impoverished farmers choice of crops. Opium poppies thrive on 1/6th the water of wheat.  Drought resistant poppies sustained a population whose only choice became Taliban loyalty or starvation.

Ponder climate change as a weapon. Consider ramifications of weaponizing crops We can ignore mind numbing climate change rhetoric, or wrap our heads around drought and Taliban support.