While at work today the Jehovah Witnesses dropped a “watchtower” leaflet in my mail slot. 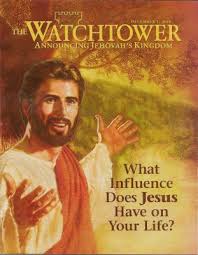 Normally I would have tossed it straight into the garbage but their new image of Jesus caught my eye. The updated watchtower Jesus looked more like the CEO of Hair Club for Men. I read on – it seems March 26 marks the 1,980th anniversary of his death. They were “cordially” inviting people to attend their church on that day to discuss how the death of the greatest man who ever lived could benefit us all. According to the apostle John – the blood of Jesus cleanses us of all sin. They went on to ask people to consider if death ended it all, stressing the importance of attending a bible study on the subject.

Trying to remember what I knew of the Jehovah Witness faith was spotty at best. I knew they didn’t allow blood transfusions, and was fairly certain the chosen were a limited number. I confess to a little chuckle recalling a story my brother told me – he’s a licensed trapper who happened to be skinning a Marmot one Saturday morning when they knocked on his door. Marmot in hand he answered the door; they asked what was in his hand and he answered “my cat”. Let’s just say they’ve never been back.

Some research followed; I wanted to know if death ended it all. The answer is a little tricky, as it’s yes and no. JW’s don’t believe in a immortal soul or the concept of hell. They believe we cease to exist when dead, however if we dotted all our I’s and crossed our T’s in life, there is a chance God will remember and resurrect the faithful. They believe we are in the “end times” which started in 1914.  Never stating when the “end” will come, one certainty is that when the end arrives, precisely 144,000 “anointed” will ascend to heaven to rule with Christ – the rest will spend eternity in “paradise on earth”. I admit some confusion; they seem a little vague on the concept of paradise on earth after end times.

With around 7 million faithful worldwide, the odds of ascending to heaven aren’t that great – yet the faithful knock on my door or plug my mail box with an admirable tenacity. It doesn’t seem to bother any of them in the slightest. I could care less what any one wants to believe; the sooner religion is off the table the better. However; stick a flyer with “hair club” Jesus pondering “death ending it all” in my door, and I simply can’t help myself.

This link has a good overview of Jehovah Witnesses.