In 2003 Mars was closer to Earth than any time in the past 60,000 years. Tonight Mars is slightly farther away, but won’t be this close again until 2035. Doesn’t have to be tonight, but please look up and ponder Mars.

Ours is not a symmetrical universe, celestial objects don’t march in perfect circular orbit. Mass, proximity, tilt of axis, speed of rotation and composition dictate elliptical waltzes across the night sky. Every elliptical planetary orbit has a closest point (perihelion) and farthest point (aphelion) from the Sun. On July 27, 2018 “opposition” placed Earth directly between Mars and the Sun, but thanks to elliptical orbit not closest to Earth until tonight. Time between Mars opposition and closest point to Earth varies from 8.5 days (1969) to 10 minutes (2208 and 2232).

Illustration of a telescopic view of Mars at its last opposition in 2016, in contrast to 2018. Mars appears larger through a telescope in 2018. Its larger size in our sky means it’s brighter, very bright indeed, as you’ll see if you look for Mars tonight! Illustration via nasa.tumblr.com.

Mars will still be visible after July and August, 2018, but each month it will shrink in apparent size as Earth rushes ahead of Mars in our smaller, faster orbit around the sun. As telescopes show Mars smaller in apparent sky, our unaided eyes will see Mars fade in brightness. Image via NASA Tumblr.

Schiaparelli did her best, but not everything goes according to plan. Mission control’s best guess being Schiaparelli thrusters malfunctioned, pounding the lander to full fuel tank Martian oblivion at a violent 300 Km an hour.

This comparison of before-and-after images by NASA’s Mars Reconnaissance Orbiter shows two features likely created during the Oct. 19, 2016 landing attempt of the ExoMars Schiaparelli lander. The small bright feature at bottom is probably Schiaparelli’s parachute, while the dark, fuzzy blob is likely the lander’s crash site.

Unfazed by Schiaparelli’s demise, TGO dutifully marches a four day orbital ellipse of Mars. A carefully prescribed stretched loop ranging in altitude from 300 to 96,000 Km. Beginning March 2017, mission control will order TGO to repeatedly dip into the upper atmosphere, depleting orbital energy and shrinking the ellipse. Objective – a near perfect circular orbit at 400 Km by March, 2018.

A feature called Arsia-Chasmata, on the blanks of a martian volcano Arsia Mons. Width of this image is about 15 miles (25 km). Image via ESA/ Roscosmos/ EsoMars/ CaSSIS/ UniBE.

Planets don’t circle the sun, their paths follow elliptical orbits. Think of them as race cars on separate tracks traveling at different speeds – sometimes they’ll whiz past each other, other times they’re far apart. Planetary distance is measured from the Sun, orbital point closest to the Sun is perihelion, furthest away is aphelion. The closest point between Earth and Mars happens when Earth is at aphelion, Mars is at perihelion, and both planets are on the same side of the Sun – this is called opposition. In theory, at true opposition Earth would be 54.6 million kilometers from Mars. I say theory because it hasn’t happened in recorded history, 2003 marked the closest nod in 50,000 years at 56 million kilometers.

So how do you get to Mars? Roughly every two years Earth/Mars orbits are close enough to contemplate interception. With current capabilities it takes approximately 250 days, all science has to do is calculate where Mars will be  when rovers come knocking. Take 6 minutes to ponder a clip from the 2006 IMAX documentary Roving Mars –

Today, September 28, 2015 will forever stand as the date mankind closed a chapter in space history. All plot twists and dramatic interludes written to this point, upstaged by confirmation of seasonal water flows on Mars. Analysis of images from the Mars Reconnaissance Orbiter confirmed “seasonal dark streaks on Mars” (technically, recurring slope lineae )were the result of moving surface water.

Waxing and waning Martian streaks coincide with the seasons, actively darker and “moving” when temperatures hover between 0 – 30 degrees Fahrenheit, grinding to faded halts in colder weather. Media widely reports “flowing” water on Mars, an image that might conjure notions of rivers or freshwater pools – not so fast. Think along the line of trickles or oozing, no one knows where it comes from – theories range from melting sub-surface ice to salt crystals absorbing water vapor until reaching critical mass, bursting briefly to form muddy striations.

Martian water is so salty, the Dead Sea looks like a pristine mountain spring. Salty enough that temperatures of 21 degrees Fahrenheit (average air temperature on Earth required to form sea ice ) equate to the balmy days of Mars water “flows”.

Flow, trickle, ooze, melt, crystallize, evaporate – I don’t mind, we have water on Mars. Our search for life demanded proof of liquid water, tomorrow we  begin the next chapter.

April 15, 2015 NASA’s Mars Curiosity Rover spent the 956th day of its’ Martian mission deploying “mast cameras” from a position within the Gale Crater. Hoping to capture a transit of Mercury, Curiosity took 6.51 minutes to immortalize this time-lapse compilation of a Martian sunset. Ponder Curiosity’s first colour sunset from Mars.

Convincing myself it was only a matter of time doesn’t ease a simmering annoyance with Mars One. In recent years corporate interest in private space flight surfaced with increasing regularity. Virgin Galactic is attempting private space excursions, talk of mineral exploration, and private trips to the International Space Station are commonplace. Mars One is different – forget funding, practical science, technology or common sense. Mars One inked a reality television deal.

February 16, 2015 Dutch based Mars One announced their list of  “top 100” candidates for a one way ticket to Mars in 2024. NBC television announced a “reality” program to select 24 finalists from 50 men and 50 women destined to establish permanent Martian settlement – a one way ticket with no chance of ever returning to Earth. A peek at Mars One website cemented my suspicion, it was nothing more than opportunistic marketing – mindless fluff aimed at being first to corner an angle.

In this day and age minor details such as funding and probability of success evaporate once “reality” comes knocking. Mars One corporation is officially “non-profit” – ponder that a moment. A non-profit organization announces one way tickets to Mars in a 2013 contest, receives over 200,000 applicants, then announces 100 finalists before the ink is dry on a reality TV series. Feeble encouragement of “donations” suffocate the Mars One site. I like their “Business Model” link – interested corporate sponsors can look at a nifty graph illustrating benefits of Olympic corporate sponsorship. Apparently sponsorship delivers gold medal profits.

It would be tough to find a more fervent supporter of cosmic discovery than myself – harder still to find another as disgusted by Mars One audacity.

April 8, 2014 is “Mars Day”. Tonight Mars will be in “opposition” to the Sun – from an Earthly perspective, Mars appears opposite the Sun as Earth orbits between the two. Since orbits are uneven, all oppositions are not equal -this April Earth hurtles past Mars on its closest orbit since 2007. Tonight Mars practically begs us to look at night sky – it doesn’t matter where you live, Mars shines as brightly as any object in the sky.

Orbiting the Sun on tilted axis may result in seasons and polar caps, but little else in common with Earth. Liberal science fiction conjures images of a “red planet” – red equated with images of sweltering heat rather than an abundance of iron or knowledge of a -60 degree Celsius average temperature.  Home to Olympus Mons – three times taller than Mount Everest, soaring 27 Km. above the surface – the solar systems’ tallest peak.  The greatest valley, Valles Marineris, – 10 km. deep running for 4000 km., as well as raging dust storms lasting months at a time.

Our skies finally cleared allowing for this “screen shot” of Mars courtesy Google Sky Map on my android phone. 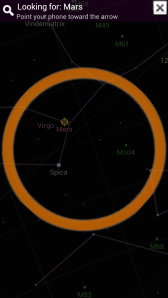 Anyone who hasn’t put this app on their phone needs to do so immediately.

My last post asked people to look upwards; in particular, to cast eyes at the night sky and “wonder”. Not foolish enough to think my cosmic ponderings could ignite embers in those not inclined – I did vow to try “baby steps” – patient little steps intended to draw attention away from planet earth. Beginning with a video of lightning and auroras as seen from the space station, and linked below – next stop is Mars.

On April 8 of this year, Earth will pass between the Sun and Mars. This happens every few years, making 2014 a “good” year for Mars viewing. The months leading up to and following this date are perfect for Mars watching.  Rising in the east, by April it will be visible from dusk until dawn.

Here’s one way to find Mars, and the star Spica nearby, if you’re in the Northern Hemisphere.

Here’s a way to find Mars, and the star Spica, if you’re in the Southern Hemisphere.

I can’t ask anyone to find wonder, all I can do is offer tools and hope for the best. I will promise one thing – once you get some sky basics under your belt, you’ll be hungry for more.

I’ll conclude with a few Mars facts – due to elliptical orbits, the distance from Earth to Mars swings wildly. The closest distance being 56 million Km., and greatest 401 million Km. Mars is the fourth planet from the Sun, the first “visit” was by Mariner 4 in 1965. Olympus Mons is the tallest mountain, with a base of 500 Km, it rises 24 Km above its surroundings and has a cliff on one side measuring 6 Km. Scientists believe surface water was present millions of years ago – a conclusion drawn from extensive images of erosion. In 1996, meteorite ALH84001 – believed to be of Mars origin – was reported to contain fossilized micro-organisms; still debated by scientific communities, yet something to ponder.

A link to “Mars facts”