From Peter at Embrace Serendipity, the truth about lies –

“According to a 19th century legend, the Truth and the Lie meet one day. The Lie says to the Truth: “It’s a marvellous day today”! The Truth looks up to the skies and sighs, for the day was really beautiful. They spend a lot of time together, ultimately arriving beside a well. The Lie tells the Truth: “The water is very nice, let’s take a bath together!” The Truth, once again suspicious, tests the water and discovers that it indeed is very nice. They undress and start bathing. Suddenly, the Lie comes out of the water, puts on the clothes of the Truth and runs away. The furious Truth comes out of the well and runs everywhere to find the Lie and to get her clothes back.

The World, seeing the Truth naked, turns its gaze away, with contempt…

It’s getting tough out there. 2019 went down for the count in clutches of an impeachment maelstrom, ushering 2020 in with invitation to poke sticks at the Middle East. Tough indeed. Remember the adage “when things get tough, the tough get going”? Allow me to introduce Vancouver, B.C. cowboy surf rock band, The Modelos. Ponder the power of music to raise spirits. Allow The Modelos to plant an earworm and know you’re not alone. It’s gettin’ tough, time to get going.

Seems I twisted a few gun metal gray panties. Silly Canadian, what was I thinking? Who but an idealistic fool posts a question on Quora asking Americans if they’re bothered by the Virginia Beach massacre taking 148th place in number of 2019 U.S. mass shootings.

Reaction was swift and prolific, capsulated in overwhelming contempt. “Are you a stupid child?”, “Go crawl in a hole somewhere”, “It doesn’t impact my life, why are you making false claims?”, “Do you enjoy being a liar?”, “You’re a weak minded pussy”, “Cry to someone who cares” – those are the nice comments. No measure of “easy now” could placate collective wrath.

Take a deep breath, I said. This isn’t a personal attack, can we exchange perspectives without resorting to juvenile bullying? Apparently not. “You’re pathetic” they quipped. “A pathetic fool repeating lies by self interested political agendas”. Excuse me? You take issue with the definition of mass shooting? Only 3, not 148 in 2019, you say? Wikipedia says –

“There are many definitions of a mass shooting:

Mass Shooting Tracker: 4+ shot in one incident, at one location, at roughly the same time.

Gun Violence Archive: 4+ shot in one incident, excluding the perpetrator(s), at one location, at roughly the same time.

Vox: 4+ shot in one incident, excluding the perpetrator(s), at one location, at roughly the same time.

USA Today: 4+ shot and killed in one incident, at one location, at roughly the same time (same as the FBI‘s “mass killing” definition).

Mother Jones: 3+ shot and killed in one incident, excluding the perpetrator(s), at a public place, excluding gang-related killings.

The Washington Post: 4+ shot and killed in one incident, excluding the perpetrator(s), at a public place, excluding gang-related killings.

Only incidents considered mass shootings by at least two of the above definitions are listed.”

Interested in reviewing their tally of events linked below?

No? I’m still a stupid child?

Not since posting support for abortion rights and being told I deserved to watch everyone I loved murdered before my eyes to teach me a lesson, have I encountered such absurd jibber-jabber. Fortunately this Canadian can turn and walk away.

“We tend to assume that if a story is being covered by major news networks, it’s because journalists have decided that the story is important. But thanks to Fox News, that’s not always true.

The network was specifically created to generate scandals that would hurt Democrats and help Republicans. And because most major networks pay attention to what happens in conservative media, those pseudoscandals end up creeping into mainstream coverage.

The result is a media ecosystem that advantages Republicans by paying disproportionate attention to right-wing talking points.

This past weekend Donald Trump delayed tRump time at his private golf club in Bedminster, N.J. to speak at a fundraiser hosted by the chairman of Nathan’s Hot Dogs in the Hamptons. Trump seized the opportunity to blither “clean coal”. Key word being “blither”.

Everyone knows Trump’s position on coal, the environment and decimation of all policies Obama. Most of us glean Trump policy from regurgitated reason of talking media heads, few bother to ponder the source verbatim. Take a moment to read this transcript of Trump’s speech in the Hamptons. Read it and weep. –

“We have — clean coal exports have increased, 60 percent last year — clean coal, which is one of our big assets that we weren’t allowed to use for our miners. You remember Hillary with the coal, right, sitting with the miners at the table? Remember? That wasn’t so good for her. So the people of West Virginia and all over, you look at Wyoming, you look at so many different places where they just, Pennsylvania, where they loved what we did, and it’s clean coal and we have the most modern procedures. But it’s a tremendous form of energy in the sense that in a military way — think of it — coal is indestructible.”

“You can blow up a pipeline, you can blow up the windmills. You know, the windmills, boom, boom, boom [mimicking windmill sound] bing [mimes shooting large gun], that’s the end of that one. If the birds don’t kill it first. The birds could kill it first. They kill so many birds. You look underneath some of those windmills, it’s like a killing field, the birds. But you know, that’s what they were going to, they were going to windmills. And you know, don’t worry about — when the wind doesn’t blow, I said, ‘What happens when the wind doesn’t blow?’ ‘Well, then we have a problem.’

“Okay, good. They were putting them in areas where they didn’t have much wind, too. And it’s a subs — you need subsidy for windmills. You need subsidy. Who wants to have energy where you need subsidy? So, uh, the coal is doing great.” 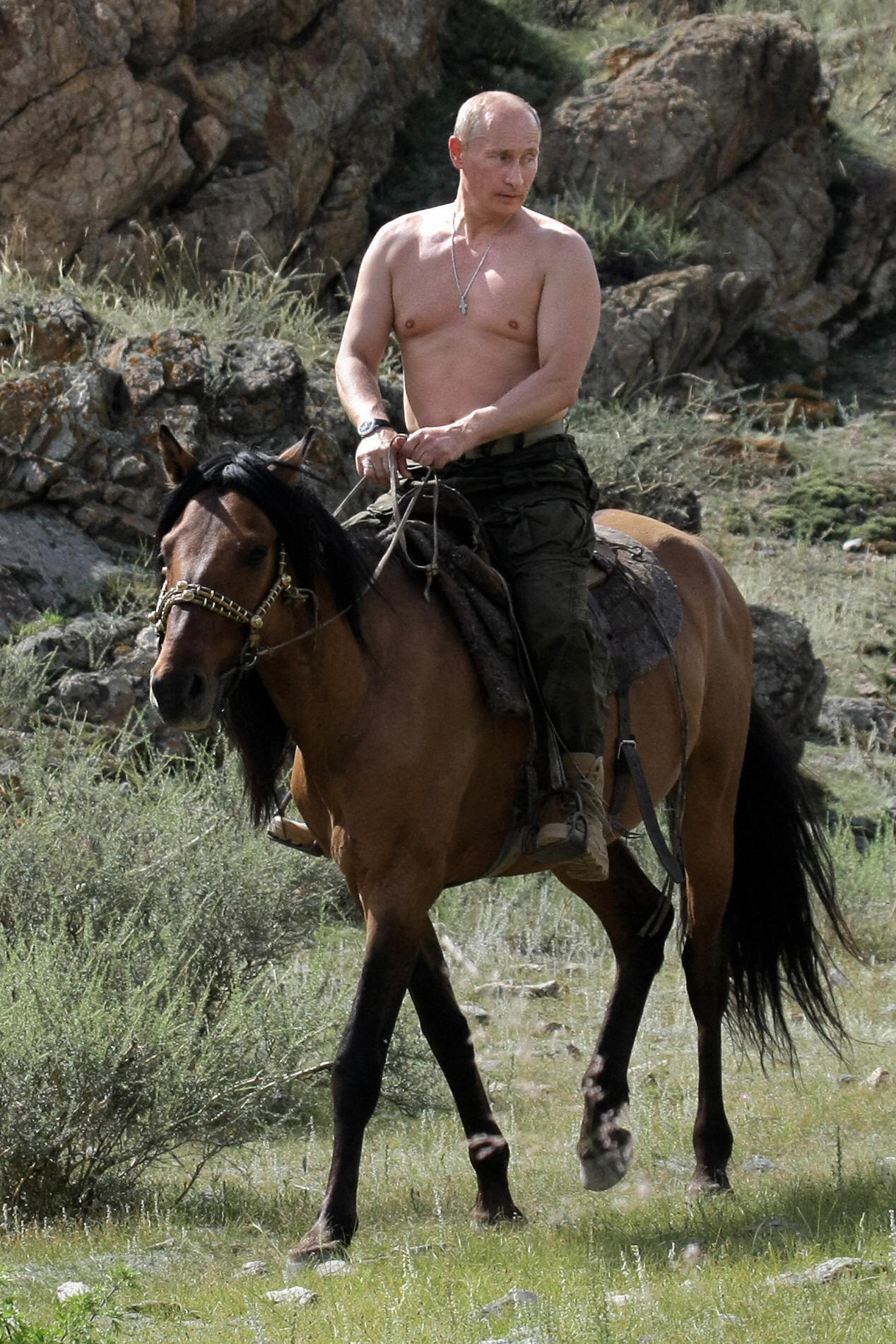 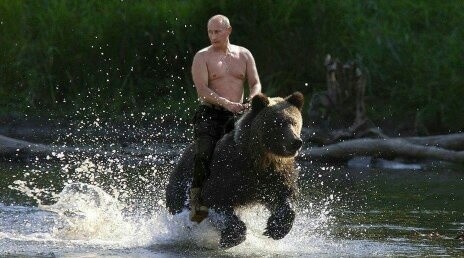 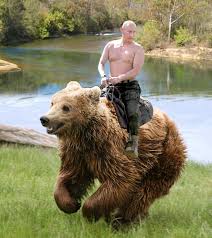 Wonder why Trump and Putin play nice? Neither gives a rat’s ass what anyone thinks. Trouble is, Putin has the upper hand. Russians calling bat shit on Putin mysteriously disappear. Americans recognizing Trump as their greatest disaster talk till blue in the constitutional face, all they get is a fake news headache.

America, you elected a swell president A year ago this week, a month before the election, you said “Meh” to “grab them by the pussy”. Nobody cried “fake news”, how could you – Trump’s abominable core was irrefutable. Amid the propaganda frenzy of “crooked Hillary”, did you think the world would overlook dismissal of a  “grab them by the pussy” president? How about your wives, daughters, sisters, mothers? Could Trump grab your daughter by the pussy provided he made America great again?

If you support Donald Trump watch this video. When you’re done, explain to your wives, daughters, mothers and sisters why a great nation condones exploitation of women as sexual objects. When you’re done, ask yourself if a man like this represents your core values. Have a word with yourself, explain to your sons they too can take advantage of women if they’re rich and powerful enough. A year after “grab them by the pussy” defined your president, ask yourself how excusing his loathsome sense of entitlement makes America great. 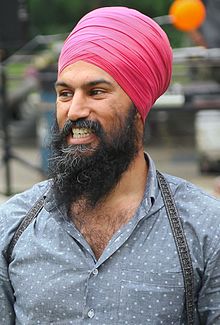 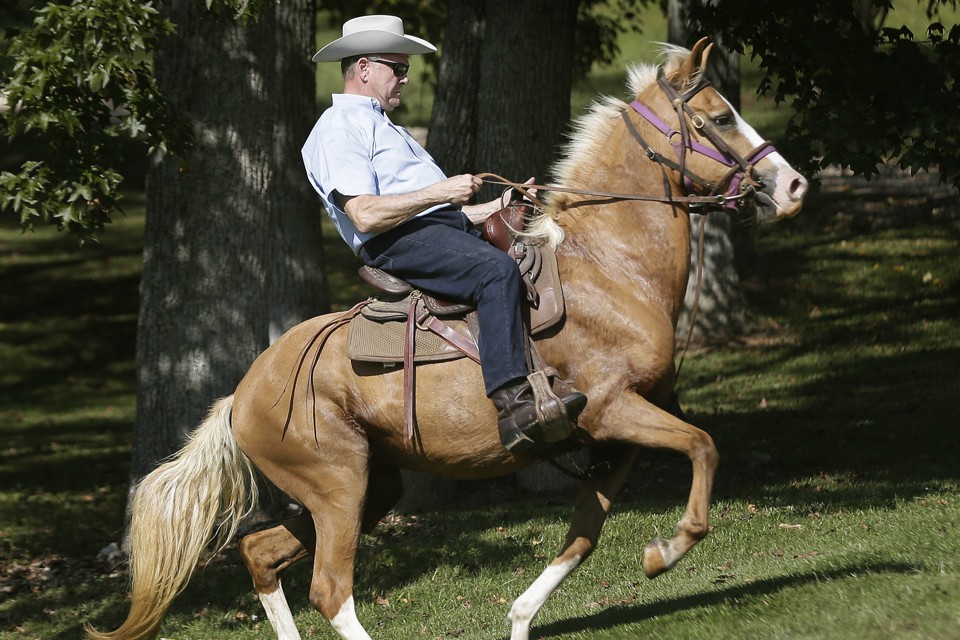 Climate deniers who call me “Ecoclown” or Nutstoponder” roll off my back, but when snide conservative lips robotically hurl Libtard contempt in place of independent thought I see red. Those who smirk Libtard do so with self satisfied impervious ignorance. It basks in a right wing embrace, uttered with reckless glee any time whiffs of social conscience wrinkle a righteous nose. Libtard is neither amusing or clever, it proves nothing but the disparaging depth of a callow existence.

The Online Slang Dictionary declares it a noun defined as – “a person with liberal political beliefs. Pejorative. From “liberal” + “retard”. Urban Dictionary elaborates with – “Libtard n. Portmanteu of “liberal” and “retard”. Someone who, intoxicated by being knowlegable and right about politics and economics, forgets that they need to get actual real ordinary people to support them if their agenda is to be advanced. Often but not always rich, well meaning and with good insight to society’s problems, but naive about the mechanics of politics and utterly ignorant about how power actually works.”

Call me a communist, blither Biblical condemnation of atheist morality, quiver in fear of Islam, frack away, encourage resource corporations to foul fresh water, buy more guns, disregard poverty and civil rights, drink Trump Kool-Aid , but how you dare call anyone a Libtard.