Spiritual leader Rev. Sean Moon presides over World Peace and Unification, a breakaway of his late father Rev. Sun Myung Moon’s Unification church. Followers are encouraged to bring assault rifles to church, AR-15s represent “rods of iron” in the book of Revelation. Parishioners pray for “a kingdom of peace police and peace militia where the citizens, through the right given to them by almighty God to keep and bear arms, will be able to protect one another and protect human flourishing.” Outside, state police draw a line between protesters and pious rod of iron Unification faithful. Alarmed Wallenpaupack Area School District officials evacuate an elementary school several blocks away. Bewildered devotees can’t imagine what the fuss is about. They stand with iron rod indifference toward a nation traumatized by 17 students gunned down by an AR-15 in Parkland, Florida. As far as they’re concerned, “an attendant checked each weapon at the door to make sure it was unloaded and secured with a zip tie, and the elaborate commitment ceremony went off without a hitch.”

Beyond women in white, men in black, AR-15 assault rifles in the hands of many, ponder bullets fashioned into gold crowns. Witness dozens of followers attending a “commitment ceremony” to exchange and renew  wedding vows. The ceremony, Cosmic True Parents of Heaven, Hearth and Humanity Cheon Il Guk Book of Life Registration Blessing, was part of a week long “Festival of Grace” .

Religious “gun-damentalism”, equal parts NRA propaganda, calculated manipulation of truth and wack-a-doodle bible study. Followers unable to legally obtain a assault rifle in time for the ceremony were urged to purchase $700 gun store gift certificates as evidence they would secure rods of iron in the near future. The church insists they do not worship or bless guns, rather “God centered families are sovereign and prepared to defend themselves with the rod of iron, which is represented in the AR-15.” 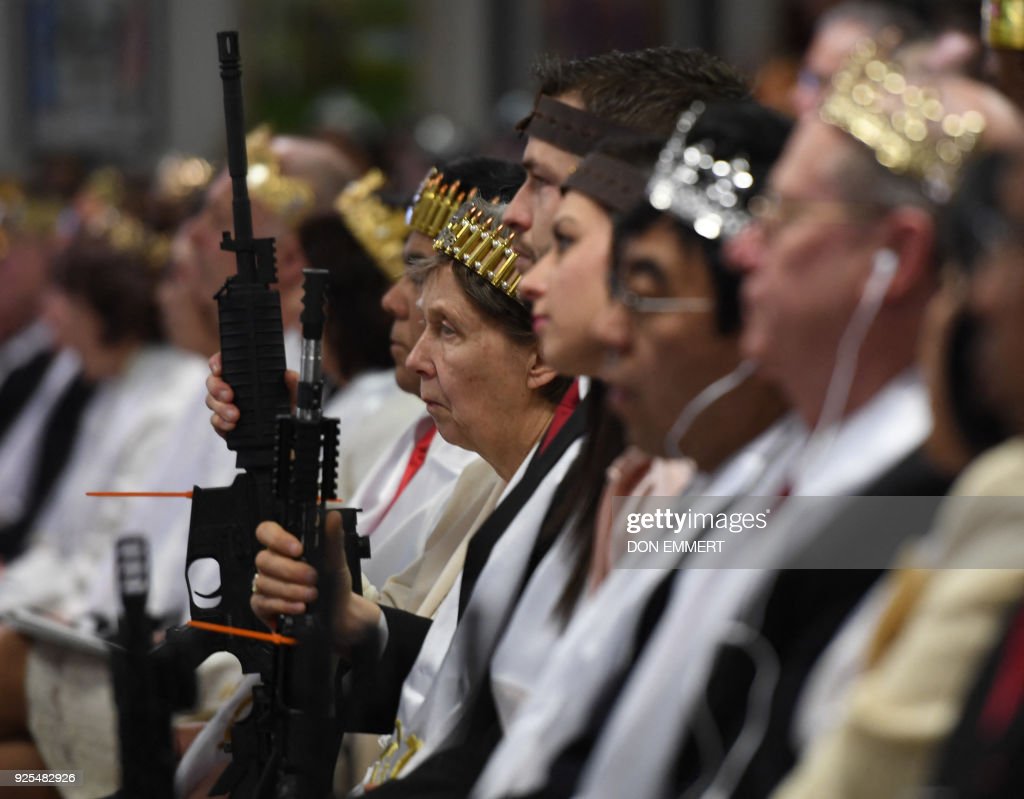 World Peace and Unification hold fast to their God given right to protect themselves from “sickos and evil psychopaths.” Oblivious to all but rod of iron ceremony. “People have the right to bear arms, and in God’s kingdom, you have to protect that”