Every so often Justin Trudeau kicks ass – specifically, when he pisses off right wing America by expressing honest, tempered, polite, sensible reason. For the most part right wing America scoffs at my home and native land. Dismissing Canada as a hopeless puddle of brackish socialism suits conservative America’s agenda. So when our Prime Minister attracts the wrath of chest thumping U.S. troglodytes, this Canadian takes polite delight.

For the record Canadians have nothing to prove. We don’t seek U.S. approval or pine for the American dream. In the interest of amicable cross border relations we mind our own business. Once in a while right wing America can’t take perceived Canadian affronts to all they hold dear. They tolerated Canada under Conservative leader Stephen Harper, at least Harper tried to squelch gender, sexual orientation and abortion rights. Yesterday Justin Trudeau stood behind Canadian values – right wing America went nuts.

$220 million federal dollars courtesy the Canada Summer Jobs Program wait for qualified applicants, a subsidized grant program designed to create student employment. Here’s the catch – organizations must sign a form attesting that neither their core mission, nor the job being funded, opposes human rights including reproductive rights. Trudeau ( a Catholic for those who care since Canada doesn’t ) said –

“Certainly there is no obligation by the government of Canada to fund organizations that are determined to remove rights that have been so long fought for by women” adding “An organization that has as its stated goal to remove rights from Canadians, to remove the right that women have fought for to determine what happens to their own bodies, is not in line with where the charter (of Rights) is or where the government of Canada is”.

“For years local MPs set out which groups would be given priority to receive funding under the jobs program.

The Liberals say that under that system, groups which promoted anti-abortion or anti-LGBTQ messages applied for and got federal money, including anti-abortion groups such as Campaign Life Coalition, Life Site News, Priests for Life, and the Canadian Centre for Bioethical Reform.

After a review last summer, the Liberal government revised eligibility criteria for the program. It now requires that the “core mandate” of an organization “must respect individual human rights in Canada, including the values underlying the Canadian Charter of Rights and Freedoms.”

The government’s website says the new criteria does not exclude churches or faith-based groups, but it does say the group’s work must respect Charter values including “reproductive rights and the right to be free from discrimination on the basis of sex, religion, race, national or ethnic origin, colour, mental or physical disability, sexual orientation or gender identity or expression.”

Toronto Right To Life Association declared it will challenge government in court. The Campaign Life coalition website accuses the Trudeau government of wanting citizens to “renounce their faith”. Yesterday morning right wing America took exception, “Fox and Friends” host Brian Kilmeade said – “What message is he trying to send us, maybe?”, co-host Rachel Campos-Duffy countered – “What happens in Canada often comes down to us. This is an effort to silence pro-lifers. This is a sign of intolerance. If you have a pro-life view you’re not welcome to share it or else you’re kicked out of this program”.

What’s wrong with these people? Trudeau respects freedom of religion, is it too much to ask religion to respect the Canadian Charter of Rights? Pro-life organizations are free to hand out street corner flyers, organize marches, protest peacefully outside clinics.Trudeau’s Canada, my Canada, guarantees freedom of religion under the Charter of Rights. That said, the Canadian government has no obligation to fund objectives contrary to law of the land.

This Canadian applauds Trudeau for calling bullshit on funding efforts to strip women of fundamental rights. Pro-lifers, knock yourselves out but pay for it out of your own pockets. Trudeau doesn’t want anyone to renounce their faith, freedom of religion is alive and well in Canada. Count yourselves lucky and stop whining because the government won’t fund agendas contrary to the Charter of Rights. As for right wing America  “what happens in Canada often comes down to us” – surely you jest. Fox News wouldn’t recognize integrity if it slapped them in the face. Blither on America – at the end of the day you’re stuck with Trump and Canada has Justin Trudeau. 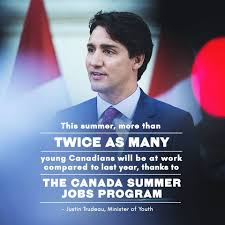