Walking the dyke near Steveston this afternoon, I stumbled upon drift rabbit… 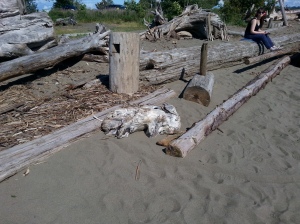 On May 27, 2016 NASA released a “mosaic” of images detailing Pluto’s surface. Captured by LORRI, ( Long Range Reconnaissance Imager) on July 14, 2015,  23 minutes before New Horizons’ closest approach at a distance of 15,850 Km. Pluto doesn’t get much closer than this –

When was the last time you heard a politician address disabilities, poverty or education? Quibbles over religion, immigration, crime, oil, same sex marriage and climate change trivialize everyday people. If  “Everyday People” produced by PFC in conjunction with Turnaround Arts doesn’t slap you with a wake the f**k up, I give up.

Playing For Change is a movement created to inspire and connect the world through music. The idea for this project came from a common belief that music has the power to break down boundaries and overcome distances between people.
Learn more: http://playingforchange.com
Twitter: @playing4change
Facebook: @PlayingForChange
Instagram: @playing4change

For an encore, take a listen to Jeff Buckley’s version –

Atlantic hurricane season starts on June 1. Prior to 1950, major hurricanes were unofficially named for city closest to landfall, officially meteorologists used longitude and latitude to identify hurricanes. In 1950 the U.S. National Hurricane Center began naming storms according to phonetic alphabet. The first hurricane was always “Able”, second “Baker”, third “Charlie” and so on. In 1953 an overhaul stemming from need to avoid repetitive use of names, resulted in female hurricanes. Another revision in 1979 spawned the practice of alternating female and male storms.

Kevin who? You know, Kevin Vickers – the former Sargeant at Arms of Canada’s House of Commons, the ex RCMP dude tasked with parliament security on October 22, 2014? You remember the shooting on Parliament Hill? Michael Zehaf-Bibeau shot ceremonial guard Nathan Cirillo at the National War Memorial outside parliament in Ottawa. Gun blazing, Zehaf-Bibeau entered parliament, exchanging heavy gunfire with Vickers and Curtis Barrett of the RCMP. Oh, that man – his name is Vickers? Canadian Ambassador to Ireland, when did that happen? January 2015, who knew? Vickers did what? Holy crap, chuck diplomacy – this is outstanding. Once a sargeant at arms, always a sargeant at arms.

Decorum, propriety, diplomacy – bah! Stop splitting hairs. Kevin Vickers is a man of black or white action. Not excessive or unprovoked, simply actions required to mitigate disruption. The sweetest thing about this bad ass Canadian – he doesn’t even know it.

Most days, ignoring Donald Trump requires effortless reminders to “let it go”. Accepting Trump’s unstoppable popularity formed as a reflex rather than “coming to terms’ struggle. Like blowing fluff off a dandelion – puff, gone, on to the next weed. Realizing America eluded comprehension, this left-wing Canadian woke one morning to a phifft of self preservation. Dispatching outrage, horror, disbelief and concern – construction of a personal Trump wall followed with seamless implementation.

Who am I kidding? Great as it felt, blissful as it was, fondly as I’ll recall glorious freedom of a Trumpless mind – the man recently referred to Elizabeth Warren as “Pocahontas”. Is he insane, consumed by delusions of infallible grandeur, determined to boldly spit in the face of decency, human rights and freedom? Regardless of which wretched ember festers in Trump’s mind, I can’t dandelion fluff away Pocahontas.

“Donald Trump was drooling over the idea of a housing meltdown because it meant he could buy up a bunch more property on the cheap,” said Ms. Warren, a Democrat from Massachusetts. “What kind of a man does that?”

She went on to argue that Mr. Trump was rooting for people to lose their jobs and be kicked out of their houses.

“I’ll tell you exactly what kind of a man does that,” Ms. Warren added. “It is a man who cares about no one but himself. A small, insecure money-grubber who doesn’t care who gets hurt so long as he makes a profit off it.”

True to idiotic playground bully form, you don’t hit close to Trump home base and walk away unscathed. I refuse to dignify Trump’s Tweeted response, suffice to say he called Warren a “hypocrite”, more importantly he referred to her as “sometimes called Pocahontas”. WTF Donald – this is how you make America great again?

It seems the same little baby who threw a tantrum over Obama’s birth certificate, wants Warren to “prove” her native American heritage. Apparently while in college, Warren claimed to be 1/32 Native American to benefit from affirmative action. Who freaking cares! Calling a U.S. Senator Pocahontas is beyond repugnant. Any American who thinks this pin headed numskull is presidential material needs their head examined. Americans disgusted by Trump’s vision of a great America ought to get off their complacent butts  and say something about it. Trump’s vile antics stopped being cute a long time ago, referring to Warren as Pocahontas defies any hope of a great America.

Never let it be said that pragmatic logic spreads evenly across a population. Google decided to mitigate pedestrian injury rather than market unrealistic jibber-jabber. Unable to make sweeping assurances of safety, Google settled on an idea responsible for a patent issued on May 17, 2016.

What happens when pedestrians are struck by a car – they might be thrown, hit by a second vehicle, fall and find themselves dragged under a moving car, or bounced against hard surfaces. Accidents are inevitable, but what if victims “stuck” to the offending vehicle. Google patented adhesive strong enough to instantly hold a person at the moment of impact. A thin layer of protective “eggshell” cracks, releasing the life saving bond.

Allow me to raise a few concerns. How many pedestrians are hit head on? What happens to a pedestrian clipped on the leg? Are they glue snatched and pulled down the street? What happens when victims need immediate life saving medical intervention? Do paramedics pry them off? Is there an instant release solvent? If wide eyes glued an eyeball to the hood, would eyesight become a hood ornament? Would fender benders glue vehicles together?

A patent doesn’t necessarily mean Google intends to glue hapless pedestrians to robotic cars. That said, the effort suggests considerable time and resources spent on addressing pedestrian safety. Imagine being one of those tasked with finding a solution – brain storming sessions, ideas bandied from lip to trash can, fruitless days, weeks, months of stalemate. Perhaps it was late afternoon when one of them muttered “we could glue them to the hood”, prompted a unanimous chorus of ‘that’s it”.

I wouldn’t presume to know more than the great minds at Google. Common sense screams of a middle aged ponderer could be symptoms of age related technological ignorance. Yikes, what am I saying! Super-gluing accidental encounters (animate or otherwise) to the exterior of driverless vehicles elevates asinine to a whole new level.

Without question, Trudeau’s actions were unexpected. In his determination to eradicate exasperating nonsense, NDP MP Ruth Ellen Brosseau was jostled as Justin turned to exit the throng. Holy crap – polite Canadian politics don’t get better than this! Take a minute to watch the clip –

Trudeau’s behavior might not have been the most appropriate – as realized in his immediate apology and further expression of regret today. But assault, manhandling of MP Brosseau? Come on people – settle down. Suck it up Brosseau, quit whining long enough to realize the genesis of Trudeau’s frustration. Sit down, cast your vote and be done with it.

As far as I’m concerned, it was freaking awesome. Freak points for daring to bend political conformity, awesome status for creating scandal based on honest emotion rather than greed, corruption or blatant lies.

An understanding exists between myself and spiders – polite spiders can stay, uppity wanderers are shown the garden. This spring I said “welcome back” for the third year to a well mannered black widow who fancies a vent in the frame of my bathroom window. Several weeks ago a small widow moved to a quiet plot beneath the bedroom window frame. The epitome of graceful respect, the world would be a better place if all house spiders took a page from the widow book.

Clearly spiders will be spiders, just as some people grind my last nerve, certain spiders are oblivious to matters of decorum. Of course spiders don’t  conceptualize cause and effect, driven by instinct they go about their merry way without cumbersome moral restraint.

Household spider sightings elicit urgent requests for immediate dispatch of arachnid horrors. At my discretion they’re shown the door, catch and release is the avenue of choice for cheeky spiders. “Off you go, stay in this lovely garden” usually solves the problem. Calm resolve ends the crisis in all but one situation. No quarrel exists with behemoth basement spiders or errant wolf spiders, the demon pictured bellow is another matter.

The photograph is lousy (taken in haste on my cell phone), I have no idea what kind of spider it is, all I can tell you – I don’t like this spider. It receives no mercy. Night after night it taunts me with unpredictable actions and glassy eyed defiance. Lurking under my pillow, uttering taunts from ceiling, wall and blinds, laughing brazenly when opening a drawer. Much as I want to say “out the door you rascal”, relentless bullying forces “take that you little shit” as I squash it in a tissue. I don’t like this spider. 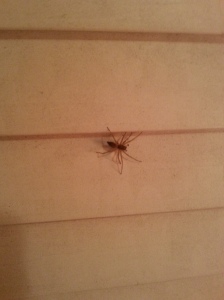 In all likelihood, over thirty years working in hospitality deems me incapable of objectively pondering “all you can eat” phenomena with anything less than contempt and bias. “All you can eat” is a mindset triggered by the suggestion of unrestricted consumption. From humble beginnings along the Las Vegas strip in the 40’s and 50’s, all you can eat became an integral facet of North American culture. All you can eat condoned gluttony, encouraged excess and banked on popularity. Quality mattered less than quantity, all you can eat fooled patrons by suggesting they controlled the dining out experience.

Fine and dandy, but here’s the problem – all you can eat culture has come to consider every edible display as all you can eat. Regardless of setting or demographic, despite common sense, decency or good manners – the moment an unrestricted table of food is displayed, is the moment “all you can eat” seizes the day.

A few days ago a client booked coffee, desserts and non alcoholic beverages to be served following a public lecture at Science World. No problem, 150 guests, service split between two stations, and if I do say so myself, stunning visual presentation. Who am I kidding? Within moments post lecture, long lines formed at each table. I watched the first thirty or so load plates with perilously high stacks of dessert bars.WTF! Do they think it’s a bottomless pit? Are they aware of how many people are lined up behind them? Did they consider a garbage bin full of “one bite taken” throw aways, while dozens go hungry?

One of my first ponders is titled “Is That A Hot Dog In Your Gucci?” Linked below for consideration –