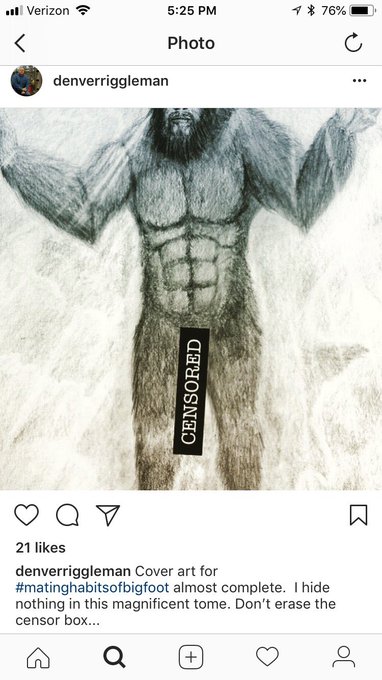 My opponent Denver Riggleman, running mate of Corey Stewart, was caught on camera campaigning with a white supremacist. Now he has been exposed as a devotee of Bigfoot erotica. This is not what we need on Capitol Hill.

“On the Cook Political Report, political analyst David Wasserman notes, “The most curious element of Riggleman’s background may be a recently-deleted Facebook author page appearing to promote a self-published book titled ‘The Mating Habits of Bigfoot and Why Women Want Him.’

“Reached by phone Monday morning, Riggleman said he has no interest at all in Bigfoot erotica, and he characterized Cockburn’s accusation as ludicrous. “We’re stunned by it.”

He said that he did write an “anthropological book sort of based on parody and satire,” which has been a running joke with “a bunch of military pals” for the past 14 years. The Bigfoot image that Cockburn grabbed from Instagram was drawn by an artist friend who told Riggleman, “This is the best way to present your book.”

“I thought it was funny. There is no way that anybody’s dumb enough to think this is real,” said Riggleman, a former Air Force intelligence officer and defense contractor who owns a Nelson County distillery with his wife.

“I do not believe that Bigfoot is real,” he added, laughing. “But I don’t want to alienate any Bigfoot voters.”

“But on Monday afternoon, Riggleman responded with a six-minute interview on the conservative outlet CRTV’s Kibbe on Liberty show, in which he discussed the “religious war” going on between different types of Bigfoot believers — among them those who hold that Bigfoot might be able to use “psychic terror vibes” against its victims “to make you run through the woods and crash into the trees,” permitting Bigfoot to forcibly impregnate them — and said that he was proud to have fought for the rights of all Americans to believe “in whatever Bigfoot they want,” even, for example, a gluten-intolerant Bigfoot.”

“These are good people, they’re smart, they’re intelligent, and they want Bigfoot to be with them. And I think that’s a noble pursuit,” Riggleman says in the video. 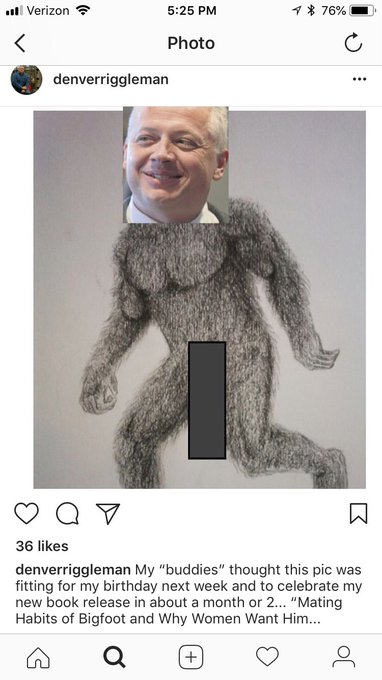 America has a lot more to worry about than Donald Trump.